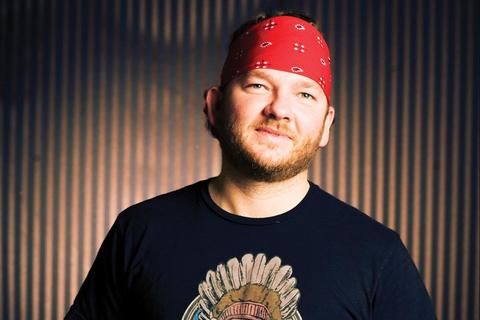 Stoney LaRue didn’t plan to take six years between studio albums, but there was an awful lot of life and music going on. For one of the icons of the Red Dirt Music movement, it was always about the moment that drove him to his next destination.
“I had a fiddle player and people kept telling me, ‘You need to get a band’,” recalls the performer/songwriter. “Live at Billy Bob’s was like jumping straight into the fire: two weeks after putting the band together, we recorded the album, hit the road and did 250 dates a year. We never looked back.”
Not looking back has been an earmark of LaRue’s roots hybrid, a sweeping musical narrative that embraces a man’s yearning, vulnerability, venality and desire. Though not meant to be a “state of the drifter” album, Velvet weighs the cost of being a man who lives by his own code against the reality it creates for others in his wake.
After six years and all that living, Velvet marks a new kind of cohesion for the man who’s built a career on live performances. Working with award-winning producer Frank Liddell (Miranda Lambert, Chris Knight, Lee Ann Womack) and Mike McCarthy (Spoon, Patty Griffin); Velvet was recorded over three years in Nashville, and finds LaRue melting down the playbook and expectations for everyone involved.
Velvet debuted at #3 on the ITunes Chart and #15 on the Billboard Country Chart.
Frank Liddell is currently producing Stoney's follow up to Velvet.

The show at Saxon Pub on Wednesday, March 12