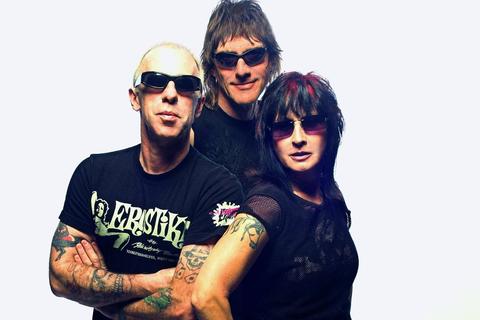 Listen to What Goes in Quiet

This is the real Detroit rock Ala The Stooges and MC-5 a resurgence of this Iconic three piece band that is still as raw and fresh as it was in 1978.
Once upon a time in mid-'70s Los Angeles, THE DOGS surreptitiously were lumped into the Do It Yourself ethos of the nascent punk scene, ironic since they had zoomed past all that before they even relocated there and started their High Times rehearsal/recording commune and Detroit Records label on Gower Street in Hollywood. They'd already fashioned same as teenagers in the late '60s without industry connections, blowing the locals and visitors alike offstage in all the important venues of the Detroit/Ann Arbor/Lansing radius, later accomplishing same in Greenwich Village, New York City '74 where their punk community sure noticed what THE DOGS were doing, even if the rest of the entertainment world remained deaf, blind and moronically obstructionist.

"HYPERSENSITIVE," the long-awaited new release by THE DOGS that coincides with selfsame video release as of January 2013.To note its repertoire includes strong Dogs' classics old and new understates feloniously. Next video to be shot by their stalwart video genius Salvatore Sebergandio comes "What Goes In Quiet Comes Out Loud," a spankin' fresh newbie. One of them however, "Beatin' The Floor" was the very first song ever written by Dogs' singer/songwriter/guitarist LOREN MOLINARE, although its driving rock sounds as fully formed as the adult Venus rising on the halfshell in Botticelli's masterpiece painting of her birth. And "Beatin' " would date from...1967. As do THE DOGS, add a year for name and personnel changes. In the Detroit/Ann Arbor/Lansing nexus THE DOGS rocked hard, fast and precise (energy-maniacs onstage they may have been, their proficiency as teens cast them practically as rock prodigies) with their own original songs from the get-go. They opened for the likes of MC5, Stooges, Amboy Dukes with Ted Nugent, SRC etc. etc. etc. throughout the late '60s/early '70s as commemorated in "HYPERSENSITIVE's" "Motor City Fever" a real knock-out dating from the same era as the bands it name-checks in one of this band's most powerfully riffed songs ever.

In the later '70s THE DOGS moved to NYC opening for Kiss, The Stilettos (proto-Blondie,) Television and all manner of punks watchful of THE DOGS' pared-down but hardcore Detroit rock performed in their own torn jeans and leather jackets ("Our normal street clothes because," laughs bassist MARY KAY, "we couldn't afford stage clothes.") Relocation to Hollywood mid-decade would find them opening for AC/DC, the Scorpions, and well, everybody, even Guns N 'Roses a decade beyond. The mighty "Slash Your Face 2012" bonus track on the cd dates from this golden age of punks, with the original finding distribution by their self-inaugurated Detroit Records circa 1978. The '80s and then newly-recruited and present drummer TONY MATTEUCCI found THE DOGS fomenting songs like "Nothing Lasts 4 Ever" as included on "HYPERSENSITIVE."

D.I.Y.? Old hat much? For THE DOGS rather, their enduring credo was Do It Anyway, come hell, high water, or the foremost enemy of rock and roll, the passage of time. Just... Do It Anyway.

The show at Javelina on Friday, March 14