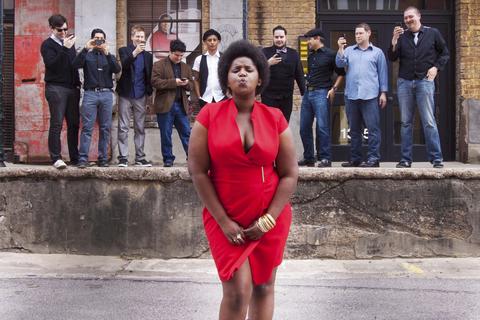 The Suffers are an experience. The 10-piece Houston, TX band create a concoction of classic American soul, rock & roll, and vintage Jamaican rocksteady so unique its no wonder they have won 4 Houston Press Awards since forming just over two years ago and have already shared the stage with The Wailers, Mavis Staples, Alabama Shakes, The Walkmen, and Cat Power. The sonically and visually arresting ensemble is packed with a level of talent and taste that provides the perfect foundation for singer Kam Franklin’s massive, passionate vocals. With deep roots in Houston's live music history, The Suffers are just a few guys,and girl, having a good time playing music that they love. The band’s debut video, a live performance of “Giver,” was premiered in January 2014 by Side One Track One following their hugely successful performance during Austin’s Free Week. Work has already begun on a follow-up to their debut 45, which will be a full-length album planned for release in 2014.

“In a more just world, The Suffers — fronted by the powerhouse Kam Franklin — should be at least as well known as Sharon [Jones] or Alabama Shakes’ Brittany Howard.”
- DFW.com