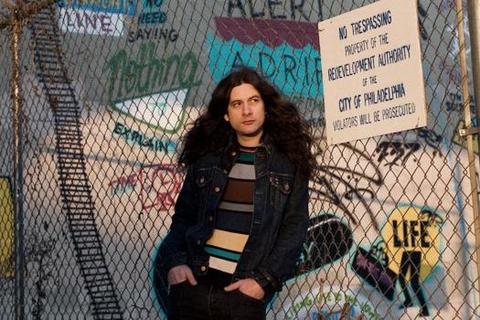 Kurt Vile (real name) has slowly, quietly become one of the great American guitarists and songwriters of our time. Kurt was born in 1980, one of ten children, and raised in the city of brotherly love, Philadelphia. As a teenager, his bluegrass-loving father gifted him
with a banjo, when what Kurt craved was a guitar – so he played it as if it were.
Bewitched by lo-fi figureheads like Beck, Pavement, and Smog, along with a love for classics like Petty, Creedence, and Neil Young, he
recorded his first songs and self-distributed them on CD-R between 2003 and 2007. These were compiled on 2008’s Constant Hitmaker and the 2009 mini-album God Is Saying This To You… The dreamy and psychedelic tangles of damaged but still-lyrical songcraft announced a major new artist wandering in from the hinterlands.
The Violators (then featuring Adam Granduciel, with whom Vile had co-founded The War On Drugs) debuted on the 2009 EP The Hunchback, coming into their own on Childish Prodigy, Vile’s third album and his first for Matador. More violent, more vivid, more ecstatically ‘rock’ than anything in Vile’s catalogue, the album was a righteous leap forward. The album that followed, the breakthrough Smoke Ring For My Halo, was more reflective, something sun-dappled and sexy in softly strung-out strums like “Peeping Tomboy,” the kindred flipside to barnstormers like “Freak Train” off the previous record.
His fifth album, Wakin On A Pretty Daze, is a 69-minute double LP and Kurt’s defining statement to date. Where previous albums alternated between gorgeous fingerpicking and heavy guitar workouts, this album blends the two in dreamy, expansive songs that gradually unfurl like a massive flag. It is a record that would have sounded great 30 years ago, sounds great today, and will still sound great 30 years from now.