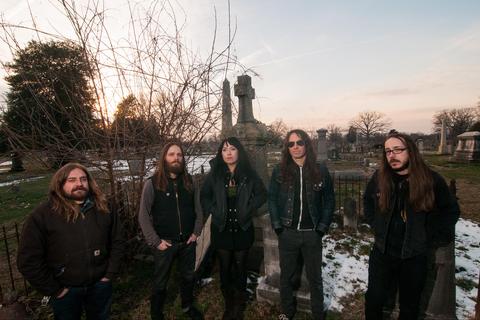 Founded in 2009 in Richmond VA, Windhand is a stoner, doom metal band made up of Aschiah Bogdan, Parker Chandler, Dorthia Cottrell, Garrett Morris, and Ryan Wolfe. They have been compared to Electric Wizard, Blood Ceremony, the Devil’s Blood, and Black Sabbath.

In March 2012, Windhand released their self-titled debut which quickly became an underground hit, selling out of multiple vinyl presses in a matter of months. It was recorded and mixed at the Dark Room by Garrett Morris and mastered at Slipped Disc Audio by Bill McElroy in 2011. After a steady touring schedule, the band collaborated with Richmond brethren Cough on a split entitled “Reflections of the Negative” due out on Relapse Records in April 2013. Windhand officially signed to Relapse Records in March 2013 and released their sophomore album, "Soma," in September of that year. Since then they have been busy touring the U.S., Europe and Canada alongside bands such as Pilgrim, Kvelertak and High On Fire, as well as being slated to play this year's Roadburn Festival and Desert Festival.

The show at Dirty Dog Bar on Wednesday, March 12