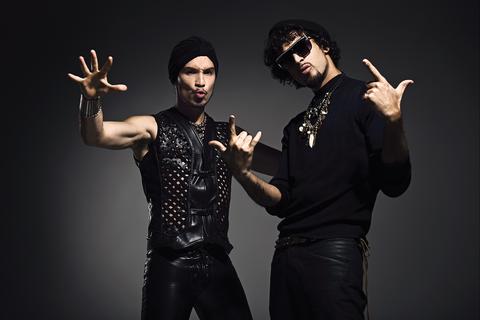 THE DUO FOUNDED BY DANTE SPINETTA AND EMMANUEL HORVILLEUR, WHO REVOLUTIONIZED THE ROCK, FUNK AND SOUL SCENE OF THE 1990s, RETURNS AFTER 10 YEARS WITH INCREDIBLE INTERNATIONAL RECEPTION AND ACCLAIM.
IKV
Emmanuel and Dante met as youngsters. In college, they and their brothers formed a group they called “Pechugo,” a satire of Menudo.
A short time later, Luis Alberto Spinetta (Dante’s late father and a rock-en-Español legend) included a Pechugo song, “El Mono Tremendo,” in his album Tester de Violencia. Later, Emmanuel and Dante founded ILLYA KURYAKI & THE VALDERRAMAS (IKV), inspired by the “Illya Kuryakin” character from The Man From U.N.C.L.E. and the Colombian soccer player Carlos Valderrama. The group’s name alluded to the cultural and musical fusions that are key to its identity.
IKV released their first album Fabrico Cuero (I Manufacture Leather) in 1991. It soared to success with such hits as “Es Tuya Juan” (She’s Yours, Juan), the title track, and “Rap del Exilio” (Rap of the Exile).
In 1993 they released their second album Horno Para Calentar Los Mares (Oven to Heat the Seas). However, it was with their third album Chaco (1995) that Emmanuel and Dante captivated their generation.
Songs like “Abarajame” (which won MTV Latin America’s Best Video Award in 1996), “Jugo,” included on their album Versus (1997) and “A Mover El Coolo” (from Leche – 1999) became classics of the Latin alternative canon.
Influenced by such greats as Prince, Michael Jackson, Stevie Wonder and Led Zeppelin, IKV is known for its pioneering, revolutionary sound.

DANTE SPINETTA
During IKV’s hiatus, Dante continued making an impact with his solo debut album, Elevado (Elevated), which received a 2003 Latin Grammy nomination for Best Hip-Hop Album. The single “Donde Vas” (Where Do You Go), was nominated in Argentina’s Premios Gardel for Best Music Video. In 2007 he released his second solo album, titled El Apagón (The Blackout), which Dante wrote and produced in its entirety. El Apagón featured collaborations with Julieta Venegas and Tony Touch. In 2009 he received an MTV Latin Music Awards nomination for Best Urban Artist. One year later, he released Pyramide, his most recent solo album, which featured the hits “Mostro,” “Pa Tras” (In Reverse, featuring Residente Calle 13) and “Gisela.”

EMMANUEL HORVILLEUR
In 2002, Emmanuel launched his solo career with the release of Música y Delirio, which featured such hits as “Soy Tu Nena” (I’m Your Baby Girl) and “Hermano Plateado” (Silver Brother). In 2004 he released Mimosa, whose title-track single featured Adrián Dargelos of Babasónicos. He swiftly followed that up with the successful Rocanrolero (2005). Emmanuel performed over 200 shows in Argentina, appearing with Jamiroquai and Shakira on their local tour stops. In 2007, he released his third solo album Mordisco (Nibble), where he collaborated with such greats as Gustavo Cerati. He launched a Latin America tour in 2008, with major performances at Mexico City’s Vive Latino Festival and Buenos Aires’ Gran Rex Theater. Mordisco won a Premios Gardel award for Best Pop Album, Male. His most recent solo album, Amor en Polvo (Love in Dust, 2010), was produced by Emmanuel and his brother Lucas Marti. It featured such songs as “12.30,” “Amor Loco” featuring Ana Cañas, and “Japón.” In support of this album, he launched a tour that extended to over 100 dates.