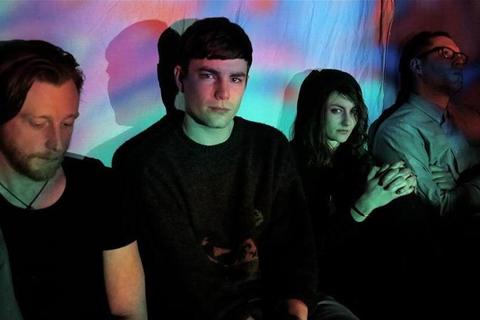 Colonies is the latest 7" from UK quartet Battle Lines. Haunting and fraught with inner conflict, 'Colonies' fuses intense, atmospheric guitars, surging rhythm and fragile lyrics that disarm the soul. Described by Noisey as a new brand of “Swerve Pop,” the song tears down emotional walls with pensive accounts of love, loss and purgatory.

Formed in the spring of 2012, in Leeds (UK), forming members Carly Humphries, Matthew Bradley, Ralph Sayers and Luke Barnfather spent early months writing and recording with producers James Kenosha (Dry the River / Pulled Apart By Horses), Lee Smith and Jamie Lockheart (The Cribs / Forward Russia). Battle Lines came to national attention with their self-released limited edition Hearts 7”, in March of 2013, helping introduce them to fans across the UK. The band followed this up with debut performances at Reading and Leeds Festivals, Beacons Festival and sold out shows across the UK.

Battle Lines returned to the studio to record their follow-up track "Colonies" and have partnered with No Sleep Records for its U.S. debut. The blistered lullaby is replete with wistful paradoxes of emotional and sexual indifference; echoing distaste with the hypnotizing line, "You mean nothing to me.” The Limited 7" features the title track as well as a new song entitled "Push." Leading up to the release, the band will make their way stateside for their first appearance in the U.S. at SXSW in Austin, TX.

The show at Esther's Follies on Saturday, March 15