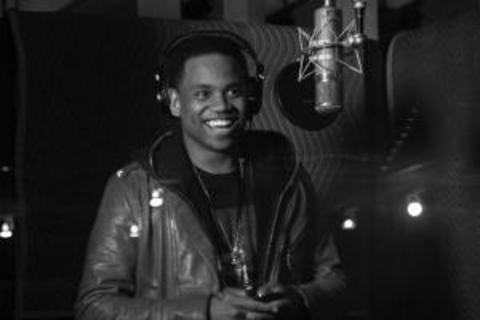 They say you never forget your first love and when Mack Wilds first fell in love, he fell hard. “It’s so dirty, disgusting and gritty, but it’s so beautiful,” the 24-year old singer says of his native New York City; the inspiration for his debut LP New York: A Love Story.
Tristan Paul Mack Wilds is best known for his acting roles as Michael Lee and Dixon Wilson on HBO’s “The Wire” and CW’s “90210” respectively, but before he hit Hollywood, Wilds dreamed of a career in music. “I don’t remember a time in my life when music wasn’t a factor in my life,” the Staten Island product says. “I was immersed in what music was in the ’90s. Everything we heard in hip-hop, I could look outside of my window in the projects and see it going on.”
Growing up, Mack saw his father sing in local bands. He looked to follow in his dad’s footsteps by practicing around their home in Stapleton housing projects, the same housing projects that produced numerous members of Wu-Tang Clan. Wilds’ earliest music influences were Stevie Wonder and Marvin Gaye, but he also took to hip-hop idolizing MCs like Jay-Z and Nas.
At around the age of 13, after puberty hit, Mack noticed his voice began to change and he then added rapping to his repertoire. “The music has always been my first love,” he says, even though his teenage years were spent acting on television and in films like 2008’s “The Secret Life of Bees” with Queen Latifah and Dakota Fanning and in 2012’s “Red Tails” alongside Cuba Gooding, Jr. and Terrence Howard.
“Even with all of the accomplishments, I still feel like I haven’t scratched the surface of where I’m supposed to be,” Mack says.
To further his career and dreams Mack released a free-seven song EP Remember Remember in 2011. The next year he hooked up with Grammy Award-winning music producer Salaam Remi and signed with his Sony-distributed Remi Fa record label. Together the two recorded New York: A Love Story, a 1990s hip-hop-centered, R&B-laced tale of love and loss.
The album’s first single “Own It” is produced by Salaam and written by Mack and R&B superstar Ne-Yo. Backed by the same drum track that drove Eric B. & Rakim’s hip-hop classic “Eric B. is President,” “Own It” finds Mack whispering sweet nothings to his dream girl with promises of a lavish life.
The flirtatious “Henny” samples from Mobb Deep’s NYC classic “The Learning (Burn),” while the seductive “My Crib” borrows from Jay-Z’s DJ-friendly “You, Me, Him and Her.” While New York: A Love Story weaves a romantic tale, sonically it’s a nostalgic reminder of the Big Apple’s most defining sounds– suited for 2013 of course.
Aside from Salaam, celebrated NY beat architects DJ Premier, Pete Rock and Havoc also lend their production efforts. Mack of course adds flowing harmonies over the pounding tracks. “The main thing that we wanted to do with this album is show that New York City is back and who better to do it than the people who made it what it is in the first place,” he says of being able to work with such an esteemed team of producers.
“This is that full-on, old school, New York, boom bap that we’ve been waiting for. This sound isn’t just old school, this is what is in our blood. It’s bigger than a ’90’s feel, this is New York.”