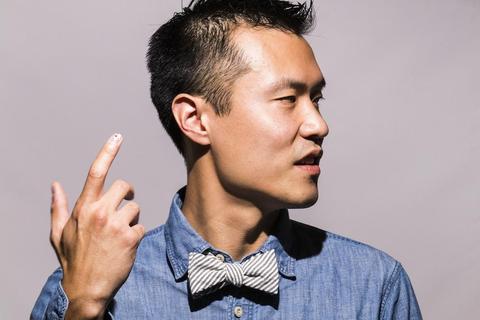 Having made a career out of making music about the things he loves, Adam WarRock has carved out a place among the Internet’s best performers and musicians. His mixture of pop culture, hip hop and just general enthusiasm has become a mainstay of every corner of cultural fandom. In the words of so many fans on and off the web, Adam WarRock is “not just Internet good. It is goddamn brilliant”

Call it nerdcore. Geek music. Whatever. Adam WarRock raps about the comics, TV, movies, video games, and culture that he loves and makes it personal. His story is one of do-it-yourself, independent determination, having gone from a humble website to a full-time music career. Having tapped into the current culture, he’s caught attention from the biggest figures and sites on the web. Whether being personally cited by Nathan Fillion for his Firely-inspired Browncoats Mixtape, praised by TV critics and cast members for his Parks & Rec EP, or made fans out of artists and writers for his comic book-influenced music, he’s gained the respect of the most fickle audiences and harshest critics around.

The list of credentials keeps growing, having had his music appear on sites such as io9, WIRED, AV Club, Time, SPIN, and more. Twice an official SXSW showcase artist, main stage performer at PAX Prime, and having toured with some of the biggest acts around, he continues to turn the heads of music fans, nerds and geeks, and people who love sincere, personal and well-crafted music. As written in SF Weekly, “Hip hop heads and [nerds] alike will have at least one aspect of his music to carry them through. And for those who fall in the center of that rap/geek Venn diagram, damn it, you’re in luck.” Or maybe it’s just easier to say it like so many others have: “I don’t know how else to describe it, but it’s awesome.”