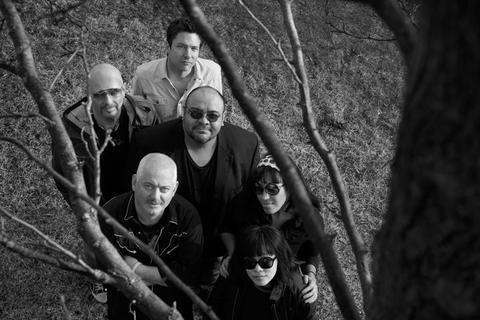 "Jon Langford has grit in his voice and melody in his soul. A punk-rock pioneer, a leading light of alt-country, a troubadour for our times, a musicians’ mentor, a visual artist of uncommon skill, a singer-songwriter who writes with the authority of having lived a life
rather just having imagined it, how do you peg Langford? Is he folk, rock, country, punk, what? Yes, he’s all that. Langford is Langford, a transplanted Welshman who’s been in Chicago long enough for us to claim him, and in doing so, stake a claim to a treasure." - Chicago New City

The L'homme de Renaissance of indie rock. (That's "Renaissance Man" for all you eating "Freedom Fries.") He's done it all in his time. For us, he's created lots of cover art, produced lots of records, lent his ham-fisted guitar stylings to recordings by the Old 97's, Kelly Hogan, Sadies, Sally Timms, Danbert Nobacon, Jon Rauhouse, Alejandro Escovedo, among others, draws a comic strip, plays in the long running art/punk collective the Mekons, written a book, appeared as the backing band on This American Life and acts as a reeling papa bear figure to many of Chicago's musicians looking for direction and reassurance in this vicious racket we call the music industry. Among the guiding forces in the Pine Valley Cosmonauts and the Waco Brothers and Wee Hairy Beasties. At any given time, he has several projects going. It tires us just trying to keep up. As nice as he is prolific. Sort of rare in the hyper-rarified environment of notoriety.