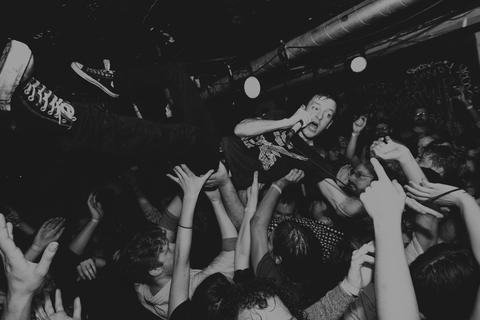 PUP
As of lately, Toronto has been the breeding grounds for some of the best punk rock bands around. The
scene is both a blessing and a curse. There seem to be 1,000+ loud rock bands in this city vying for
attention, but when you are able to cut through the static, everyone seems to take notice. This is the case
for Toronto four-piece, PUP.
What sets PUP apart in this booming scene is their ability to fuse raw punk energy with catchy earworms,
big hooks, and scream-along choruses. Their songs are loud and fast, equal parts unchecked energy and
calculated arrangements, with hair-pin turns, raging guitar riffs, and an overload of gang vocals.
Live, the band brings it full-throttled, every single show. They’ve gained a reputation for their sweaty,
raucous, no-holds-barred live set. They play loud. Like really fucking loud. And every time they get on
stage, you can be certain they’re gonna play their guts out – house party, dive bar, festival stage, it doesn’t
matter. That’s why AUX recently called them “One of Toronto’s best live bands” and Grid T.O. named
them their “Ones To Watch” for September.
In their short two years as a band, PUP has never stopped to catch their breath. It’s been two years of
tireless gigging, sleeping on couches, eating vegetable soup, nose-to-the-grindstone,
eating/sleeping/breathing music. Two years of awesome tours, shitty tours, shows with Sloan, Titus
Andronicus, Tokyo Police Club, Single Mothers, and a million shows with bands you’ve never heard of
and probably will never hear of.
And now, at last, a full-length album, set to be released October 8th. The album was recorded by legendary
producer Dave Schiffman (Weezer, The Bronx, Vampire Weekend, Rage Against The Machine), and will
be available from Royal Mountain Records.
Of the recording process, frontman Stefan Babcock says “We wanted to make an album that captured what
we do live. We recorded mostly live off the floor and there are a lot of mistakes on the album, but they’re
real and awesome, and it sounds like us, playing our songs. That’s all I’ve ever wanted out of a punk rock
record.”
The first single, “Reservoir”, has already been making its rounds, debuting at #1 on the CBC R3-30 charts,
and catching the attention of Fucked Up who both handpicked the band to open for them
this fall.

PUP is: Stefan Babcock, Nestor Chumak, Steve Sladkowski, and Zack Mykula.
“It’s a tricky balance between aggression and pop, and they get it just right” - Stereogum “BAND TO
WATCH”
“Catchy, Anthemic, and raw as hell” –BrooklynVegan
“Fiery tracks packed with scorching guitars and hooky melodies” –Exclaim!

The show at Headhunters Patio on Friday, March 14