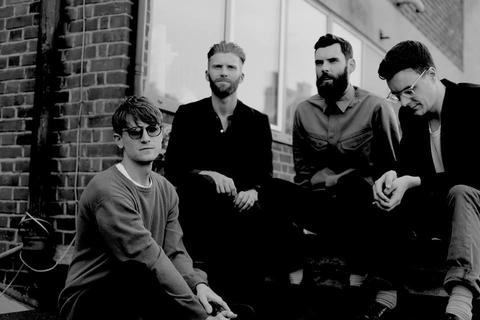 The long-awaited new album from CYMBALS is named after a book by Princeton academic, Daniel T. Rodgers, which addresses the fragmentation of ideas towards the end of the last century and how collective meanings have become uncertain. Singer and guitarist Jack Cleverly writes: "It hit me that I often feel paralysed by the feeling that everything is 'too complicated', and that many people I know feel that paralysis. I realised that this way of thinking can be traced through these songs."

Produced by Dreamtrak (Swim Deep, Chad Valley, Hot Chip) in his Hackney studio and written collectively over the last 12-months, the group have taken their time to carefully piece the album together, song-by-song, in sequence. The album was completed following a final mix from Daniel Rejmer (Foals, Everything Everything) and the result is testament to the band’s attention to detail: a cleaner, brighter sound than their brattier early recordings, edging towards the European sophistication of the end-of-the-century French house Jack grew up around. Singles 'Like An Animal', 'The End' and 'The Natural World' are characterized by an upbeat disco cool and all push the 7-minute mark, whereas ‘Winter 98’, ‘This City’, and ‘Call Me’ are brooding, stark synth-led numbers reminiscent of early-New Order, with some lyrics sung in Jack’s native French.

The literary inspiration runs further through the album. The track ‘The 5%’, more obviously making reference to the themes of the album's namesake, declares “Time can be erased, you’re stupid if you try and stay in place,” over a pulsing bassline and swirling electronics. ‘Like an Animal’ is inspired by the intellectual and moral confusion of the main character in Thomas Mann's The Magic Mountain. The album has even garnered literary responses of its own by British poet and novelist Joe Dunthorne, author of Submarine.

“I told Joe about the book and the way the album was kind of a reaction to it, and he threw my rationalisation of it back at me through a short story inspired by the album.” says Cleverly. “It helped reveal the emotional territory of the songs. He showed me how I had been dividing things up artificially - desires and priorities, getting older and not being able to stop writing music…”

Through the writing of this album, CYMBALS have inevitably matured. “We've never been in it just for a laugh," says Cleverly; “but things got confused when we said we wanted to keep it fun – we just didn't want to end up bitter, having chased a hollow dream. But this album is less about us; it's more outward looking, more aware of the world at large."

Despite the weighty literary influences, the band are keen to separate themselves from the over-earnestness that can sometimes accompany such associations. “I hate the whole 'serious earnest-singer-songwriter-thing,’” says Jack. “With this album I really wanted to get away from that and make music that makes people want to dance and feel joy. Neil's kick drum is the most important thing we have to say as a band. Is this all "fun"? Yes, of course, but at the same time, not just that."

The show at Maggie Mae's on Wednesday, March 12

⋆ 1:00AM The Pains of Being Pure at Heart