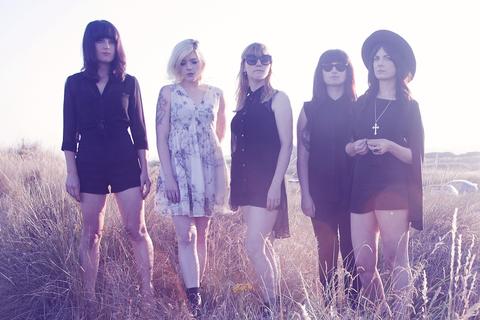 Named for a Big Star song as covered by the Bangles, September Girls comprise Paula on bass and vocals, Sarah on drums, Caoimhe on rhythm guitar and vocals, Lauren on keys and vocals and Jessie on lead guitar and vocals. Drawing inspiration from the likes of Phil Spector, The Cure, My Bloody Valentine and Jesus and Mary Chain, the five-piece play reverb-soaked noise-pop of the finest order, with distant layered harmonies, swirling organ and distorted guitars once described as "sounds from a transistor radio abandoned in a rural cinema."

Having signed with Fortuna POP!, September Girls released their debut album in January 2014, with first single "Heartbeats" released in October 2013. Their limited edition tape, "Ships," for Cassette Store Day in September 2013 via UK label Haus of Pins received flattering reviews with Pitchfork describing it as “the most thrilling music they've released in their short existence”.

"Cursing The Sea" marks the culmination of a string of releases since their formation in 2011. They released their debut tape (and 7” vinyl “Green Eyed”) with Soft Power in the UK, and two subsequent 7” records ('Wanting More' with Matinee in the U.S.A and 'Talking' with Irish label Art For Blind).

The show at Hotel Vegas on Thursday, March 13