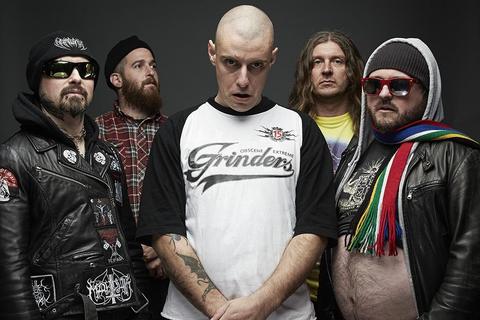 Listen to Shit on the Liver

King Parrot is a 5 piece band from Melbourne who play extreme music with elements of thrash, death, grind and punk rock. Uniquely Australian with their energy, presence and humour King Parrot are well renowned for their aggressive and visually entertaining live show. Since the bands inception onto the live scene in Australia in 2011, their work ethic and commitment to touring and releasing new material has seen them become one of the leading acts in this genre. The band have released one EP “The Stench of Hardcore Pub Trash” in 2011, and their debut album "Bite Your Head Off” has been released worldwide in 2013. King Parrot recently won The Age Newspaper/Music Victoria/Wifire Music best heavy album award and have been added to Australia’s biggest touring music festival Soundwave in 2014.

The band has caught the attention of booking agent Paul Ryan from The Agency Group in London and will help King Parrot achieve their goals of international touring in 2014.

Both releases have been serviced by Impedance Records in Australia. This year King Parrot signed a 3 album worldwide deal with Candlelight Records who are based in the United Kingdom and United States of America.
Candlelight Records are affiliated with EMI label services and Caroline Distribution in the USA and Plastic Head distribution in Europe.
The EP and album have been combined and released under the “Bite Your Head Off” banner for the worldwide market and re-released in Australia on CD and vinyl.

In March 2013 the band self funded a tour to Indonesia where they played 6 shows and appeared at Obscene Extreme Festival in Jakarta. Festival organiser, Miloslav Urbanec proclaimed the King Parrot set was one of the “most enjoyable performances I have seen in 20 years of running the festival”. King Parrot has been a major draw card on Australia’s Bastardfest, Obscene Extreme, Devil's Kitchen, Dead of Winter, Cherry Rock and Whiplash Festivals.

In June 2013 King Parrot participated in a national tour presented by youth broadcaster Triple J with internationally recognised acts Thy Art is Murder and Cattle Decapitation (USA). They have recently just finished a tour with another internationally renowned group Psycroptic, and have followed that up with their own Australian tour in September 2014. The band have also supported acts like Obituary, Kvelertak, Forbidden, Macabre, Unida and Eyehategod. Solidifying the bands presence in the national market, King Parrot have recently been rewarded with the cover of Veri-Live magazine in July, and featured on the cover of the nationally distributed Heavy Music Magazine in August.

A second single and video for the track “Bozo” has just been released. The video is based around the bands live performance and was filmed at the Cherry Rock Festival in AC/DC lane Melbourne in May 2013. Their first single and video for the song “Shit on the Liver” was a finalist in the Australian music video competition at St Kilda film festival. The video has over 100,000 hits on Youtube and has been hailed by critics and media alike as one the best Australian underground music video’s of all time.

King Parrot will continue to push the boundaries of extreme music, drawing on diverse influences and delivering a unique, energetic and captivating live show.

The show at Red Eyed Fly on Saturday, March 15