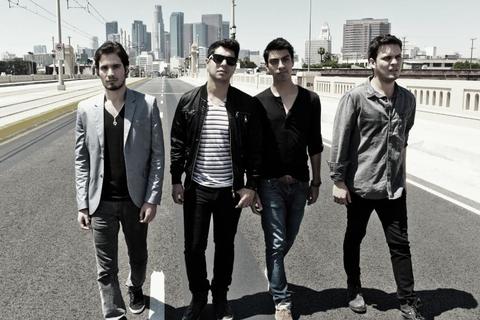 -- Vida Boulevard is from Guadalajara, Mexico

-- Vida Boulevard released their debut video for the single “Un Dia Mas” on March 6th at a special concert event to a sold out hometown crowd. Un Dia Mas Video has more than 55,000 views.

-- Vida Boulevard has nearly 500,000 views on their YouTube Channel www.youtube.com/vidaboulevard

-- Vida Boulevard is one of the few unsigned independent bands in Mexico that has toured outside of the country and taken their music to fans in the U.S.

-- Vida Boulevard has performed various shows in Mexico and U.S.in 2012 and 2013 including multiple shows at The House of Blues in Hollywood, The Conga Room in Los Angeles, House of Blues Anaheim, Club Ember in Orange County, and hip LA indie club Los Globos in Silverlake, and the Blue Agave in San Diego.

-- Vida Boulevard was invited to perform at the first YoRock DF Music Festival in Mexico City in May 2013 at the Plaza Condesa.

-- Vida Boulevard performed at the Tritone Music and Arts Festival, the first festival to exclusively celebrate the best in Latin Music from around the globe. October 19 and 20, 2012 in Chino, CA.

-- Vida Boulevard is currently playing on both the local and national club scene where their fan base continues to grow. Along the way they have performed at multiple festivals and events in Los Angeles, San Diego, Guadalajara and Mexico City where they have shared the stage with bands such as: Pastilina Mosh, Ximena Sariñana, Austin TV, Sussie 4, Hello Seahorse, Panteón Rococó, Ceci Bastida, Delux, Kill Aniston, Pastilla, among many others.

-- Vida Boulevard has an extensive catalog of material written and recorded.

-- The members of Vida Boulevard are registered BMI songwriters.

-- Vida Boulevard has received international press coverage including an appearance on Telemundo's popular Los Angeles morning show; and blogs and magazines in the U.S., Mexico, Brazil, Argentina, and Latin America.

The show at Karma Lounge on Saturday, March 15