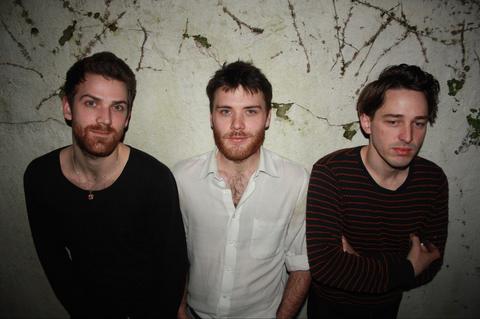 Currently hailing from Brighton, England. Kins originally formed in late 2010, around a collection of home-demos by frontman Thomas Savage.

Kins spent their first six months playing small shows up and down the coasts of Australia with the city of Melbourne acting as home-base. In May 2011 they released their 7-track debut E.P; ‘Dancing Back And Forth Covered In Whipped Cream’ which established early on, the distinct sound which earned the band a staunch set of followers.

After relocating to England, Thomas was faced with the task of finding a new rhythm section, which eventually arrived in the form of Rob and Alex. Refusing to waste a single day, the band restlessly went about writing, recording and rehearsing fresh batches of material.

In the winter months of 2013 the band decided to self-produce an album of songs, in a damp basement flat by the sea, ‘KINS’ yields 10 tracks which aptly reflect the isolated environment they were created in.

Once spread publicly, these new songs, with their themes of confusion, guilt and nihilism, provoked an immediate reaction. London blog ThisIsFakeDiy mused: ‘Rarely have we heard so much anger and cause in a band sporting sophisticated, guitar-led pop.’ This ‘anger’ is emphasised in their live show, where audiences are often startled by the strange animosity that takes hold of the sound on stage. A live review from ARTROCKER reads: ‘Songs are so brutal, that at times they feel like the equivalent of shimmering, psychedelic shotgun blasts to the head.’

Kins' momentum is fast building with strong radio support in the U.S. and UK including plays on KCRW, The Current, KEXP and BBC Radio, as well as critical praise from the likes of NME, Indie Shuffle and The Music Ninja.