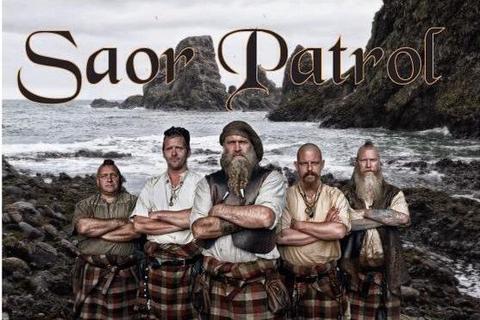 Saor Patrol (pronounced shore) uses bagpipes, drums and electric guitar to create the thunderous sound of Scottish Medieval Rock! We are a part of The Clanranald Trust for Scotland, a recognized educational charity based in Scotland since 1995. Our main goal is the completion of Duncarron, a fully interactive facility in the form of a Medieval Fortified Village, to be used as a historic educational and cultural center. Profits from our performance fees and merchandise sales go to support this cause. We also have appeared in major motion pictures with Combat International, a trained fight team used for filming that also exists to support the Trust. (i.e. Gladiator, Robin Hood, King Arthur, The Eagle, Culloden & many more) Our latest CD, "Two Headed Dog", reached #5 on the German Alternative music charts. We performed at Wacken, Germany (World's largest open air metal festival) in 2012 and have been invited back for 2014. We are ambassadors of Scottish history and culture through our support of Clanranald Trust.

The show at Russian House on Wednesday, March 12