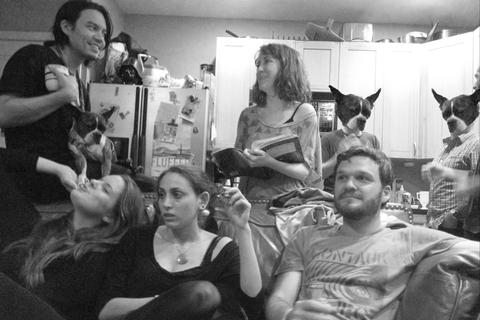 Buzz go these busy bees of Brooklyn as they collect a pollen of sight and sound to make mescaline-laced honey for your immediate consumption. Starlight Girls live in a swirling fun house of everything you don't hate about music, drawing their influence from the 20's, 30's, 40's, 50's, 60's, 70's, 80's, 90's, and the future. Whether it's a birthday party, Bat Mitzvah or church outing, Starlight Girls are sure to bring the rubbers. As the late president Theodore Roosevelt once said, "Speak softly and carry a big stick." If Roosevelt were alive today he'd be listening to Starlight Girls and diddy-bopping in his wheelchair.

Starlight Girls recently collaborated with Xiu Xiu frontman Jamie Stewart to make a brand new 7" (coming soon) that glows in the dark like radioactive birthday cake. A significant departure and natural progression for a band unhindered by the confines of genre, the 7" is a tasty treat to hold the hungry children over until the 2013 release of the full-length LP. And yes, the album actually glows in the dark.