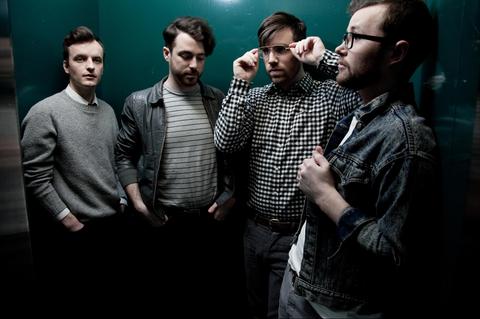 Paper Lions are an indie rock band from Belfast, PEI whose music shines with sunny melodies and tales of lost youth. Equally influenced by the clear-voiced harmonies of the Beach Boys and the clanging guitars of modern rock, at the heart of the band are long-standing friendships and vibrant pop songs based on the sandy shores of their remote island province.

Formed from a creative partnership that began in their adolescence, the band really found its shape in 2007. Rob and John MacPhee are brothers, Colin Buchanan is their childhood neighbour, and David Cyrus MacDonald they met in high school, but it took time and effort, practicing in garages and playing in clubs across North America, to become the band they are now.

The past year has seen the band embraced by a new and growing fan base. A music video originally released in 2007 for the song “Traveling” went viral over the past months, rapidly rising to 3,500,000 views on Youtube, thus bringing with it an incoming tide of new fans.

To this new following the band decided to offer something in return, and started giving away their “Trophies” EP in exchange for an email address. Mere hours after posting the letter of explanation to their fans, it hit the front page of Reddit.com. Over the next day, the band's website collapsed under the weight of over 130,000 hits, and since, the EP has been downloaded more than 25,000 times.

So it has been a very hectic, strange and exciting year. One that was capped off by the recording of their sophomore full-length album, My Friends, with producer Howard Redekopp (Tegan and Sara, The New Pornographers, Mother Mother) in Vancouver, Canada. Slated for release in August 2013, these songs are a Polaroid of Prince Edward Island twenty-some years ago. Stories of love and pain, childish fights, best friends, beaches and forts; they evoke the melancholia of youth, remembered by someone not very far from it.

Paper Lions has received 16 ECMA nominations and one win, over twenty PEIMA nominations and four wins, the Touring Artist of the Year award from CAPACOA, a Verge Music Award nomination, and a CBC Radio 3 'Bucky' award nomination. They've shared the stage with such varied acts as CAKE, Tokyo Police Club, Hollerado, The Rheostatics, No Joy, Hot Hot Heat and Electric Six. They've had their songs featured on ABC and NBC, MuchMusic, MTV and AUX.

The new album, My Friends, is based on themes of adolescence and youth but marks maturation in the band’s writing. It is the beginning of a new chapter in the band’s career. For the release of the album, the band has established its own imprint, Fountain Pop Records (Outside Music); shedding the trappings of the industry to carve their own path forward.

The show at Friends on Saturday, March 15