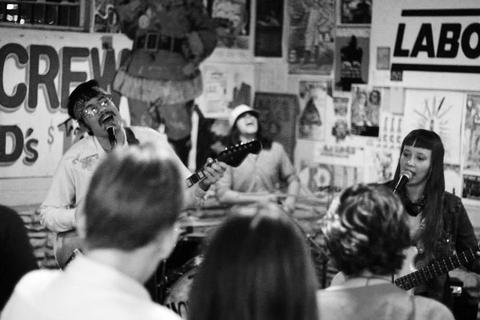 Listen to Dip It In

Those Howlings have been playing sunshiney garage punk since Kyle and Jolie founded the band in Logan Square, Chicago, IL in 2011. Kyle, Jolie, and Adam currently live in Austin, TX where they spend their time drinking beer on the river and in the record shop. Their debut record, "Manifest Blasphemy," is a triumph of DIY 8-track cassette recording, and their new single "Paid For You b/w Dip It In" will surely become a summertime hit for the ages.

'More good stuff coming out of the Austin Texas punk scene. Those Howlings offer up their 7” (two songs) of super charming garage/psych/ “rock and roll, emphasis on the roll.”' - Camylle Reynolds, Razorcake

"Garage, psych, punk, surf and rock? Hell, put it all on the table. Shake it in the shaker. Take it and run." - Laurie Gallardo, NPR

The show at Cheer Up Charlie's Inside on Tuesday, March 11