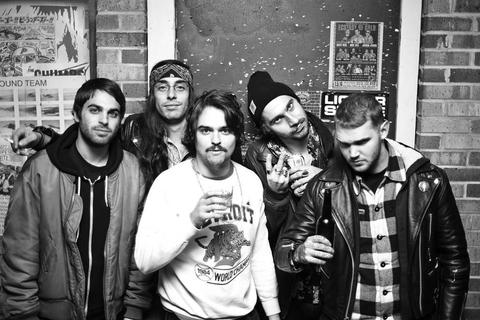 LIQUOR STORE may very well be the only REAL rock'n'roll band in existence today, or at least the only one with enough balls and attitude to be as true to the form as they are. These guys will save America if everyone can stop posing long enough to give them a chance. Whereas Yeah Buddy was a magnum 2xLP opus, In the Garden clocks in at a concise 35 minutes with eight songs of uncut rock showing off the guitar moves they've tightened the screws on even further since last go-round. The production is fittingly big, the instrumentation full of flash and bang and polished with liberal doses of piano, harmonica, tambo, keys, snaps, claps and more that sound like a million bucks. Lyrically, these tunes have some of the finest poetry written since Andy Shernoff was still on an active roster. The triple guitar assault is devastating, recalling the majestic three gun attack of Molly Hatchet and echoing some of their fine Southern rock moves as well. "Keys to the Face" is the big time anthem here—as tough and tight as leather pants, a mean and mysterious rocker that drives with indelible catchiness. Guitar lines bob and weave and intertwine with each other, the type of teamwork not seen outside of organized sports. "Big Wheels" is a tale of takin' care of business delivered with a twangy zest and zeal that even BTO couldn't muster (probably because they were Canadian). "Pile of Dirt" cribs moves from the good ol Nuge himself, take-no-prisoners guitar action that hasn't been heard since "Stranglehold", combined with the world-beating self-loathing that powered the best of classic punk. "Vodka Beach" shows off their sensitive side - who needs romance, when you've got a hand? "Titty Was Loc'd" is some band of brothers kinda shit with the type of spirit that would make The Boss proud. And speaking of The Boss, "Midnight Walker" fits in somewhere between him and the Dead Boys, a modern day "Sonic Reducer" as envisioned from the shores of New Jersey. If anyone has any taste (or a clue) this record should be launching Liquor Store into the music stratosphere. Real rock'n'roll is a mercurial thing—don't let it slip through your fingers. (Chuck Barrels)