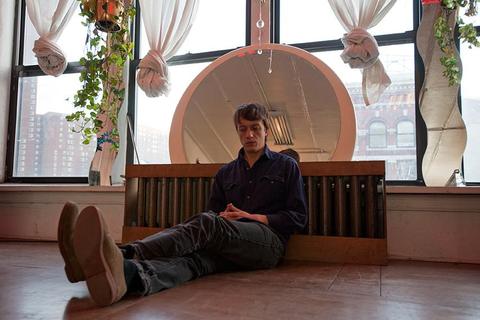 Steve Gunn is a New York-based guitarist and songwriter. With a career spanning nearly fifteen years, Steve has produced volumes of critically acclaimed solo, duo, and ensemble recordings. His albums with GHQ and longtime collaborating drummer John Truscinski represent milestones of contemporary guitar-driven, forward music. A voracious schedule of international performances has cultivated a fervent fanbase for Gunn’s music throughout the world. These days you can find him playing with his trio as well as serving as guitarist in fellow Philadelphia-bred troubadour Kurt Vile’s band the Violators.

Mining the catalogs of Basho, Bull, Chapman, and Sharrock, among other titans of stringed-things and record-session royalty, Steve has steadily processed these inspirations into a singular, virtuosic stream. Friendships and collaborations with Jack Rose, Tom Carter, Meg Baird, and Michael Chapman colored the disciplined evolution of the discursive, deconstructed blues sound, at once transcendent and methodical, that is now Gunn’s signature. Close listening reveals the influence of Delta and Piedmont country blues, ecstatic free jazz, and psych, as well as Gnawa and Carnatic music, on the continually unfolding compositions.

Gunn’s 2009 solo masterpiece, Boerum Palace, demonstrated a fully realized power for songcraft. Steve started to sing more and developed a commanding vocal style equal to his guitar practice. His acclaimed instrumental duo recordings with Truscinski, Sand City (2010) and Ocean Parkway (2012), cemented his place among the top of his peers, both present and past. These documents display Gunn’s compositional penchant for charting musical travelogues that ramble through city and wilderness alike. Dispatches home are not merely descriptive but corporeal; the evocative, rhythmic power of his writing and phrasing carries the listener along bodily. Steve builds songs as exploratory vessels, opens them up for mechanical tinkering, and lives in them through ceaseless improvisatory permutations.

Paradise of Bachelors is thrilled to release Time Off (2013), his first album as leader of a trio including longtime friends John Truscinski on drums and Justin Tripp on bass, and a record on which Steve’s compelling singing features more prominently than ever before. The album features his oblique character sketches and story-songs about friends, acquaintances, and denizens of his Brooklyn neighborhood, using the trio band format to launch his compositions into new, luminous strata. This is Gunn at the top of his game, writing his most memorable tunes and lyrics, utterly unique but steeped in traditions both vernacular and avant-garde.