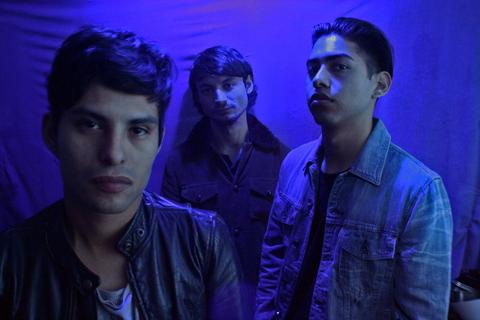 California's independent record label Burger Records exclaimed, "INTRODUCING... VISION!!! REEEEEEALLY AMAZING BAND OUTTA LA!!! THEY WALKED UP, GAVE US THEIR DEMO AND SAID THEY DON'T GET ENOUGH RECOGNITION, IT WAS INTENSE!!! TAPE SOON (LP LATER???)!!! BETTA'RECOGNIZE!!!" Formed in the summer of 2011 by brothers Christopher Valer and Phillip Dominick, the duo were later joined by childhood friend Benjamin Nastase and shortly after recorded their first self-titled EP, released by Burger Records in 2013. The EP arbitrarily lives up to the Fullerton labels' exclamation, grabbing and taking you through an intense roller coaster-esque series of tracks such as 'You Should Know' and 'She Can't Be Wrong' reminiscent of acts such as The Jesus and Mary Chain, The Stone Roses and Joy Division. To date, the band has opened up for acts such as Ty Segall and The Black Lips and is currently about to embark on their second west coast tour, in promotion of their new full length album entitled Inertia, to be released by Burger Records in the spring of 2014.

The show at Lit Lounge Upstairs on Tuesday, March 11