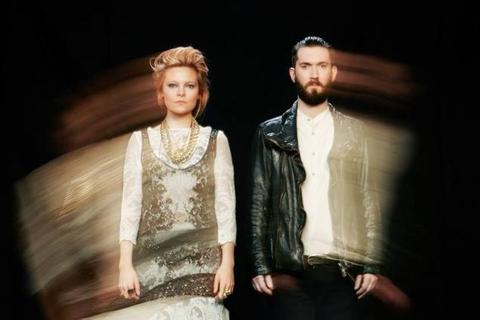 Feverishly crossing the line between Electro, Industrial and Dance, Liela Moss’s spiritual, earthy, and sometimes tongue-in-cheek, lyrics and inimitable vocal style give North London’s Roman Remains’ music an alluring feel that draws its audience into another world; whilst the music’s unpredictable twists and turns give a quick, cold slap around the listener’s face before they fall too far into the psychedelic rabbit hole.

With multi-instrumentalist and producer Toby Butler joining Moss, Roman Remains are on a quest, with one very simple objective—to make music you can feel in your bones.

“It's a living, breathing, digital being,” says Butler on the late 2013 release of the band’s debut EP ‘Energy You.’

“It was about creating our own environment to nest in” add Moss… “and you can definitely throw shapes to it!”

Mixed by Damian Taylor (Bjork / Austra / UNKLE), Roman Remains’ three-track EP encapsulates the band’s pure unadulterated enthusiasm and fervor they felt making the music and precedes the band’s upcoming album ‘ZEAL’, all of which was recorded in London.

“I'd been wanting to experiment with writing songs using different methods, specifically electronic instruments, for sometime, but I wasn't sure where to begin,” explains Butler. “I'd bumped into Simon Byrt [Co-Producer] and I told him about what I wanted to do. When we worked on some songs together at his studio in London it pretty much gave me a method and direction immediately. It was total limitless freedom. I felt like I'd just busted open a hundred doors that I'd been curious to know what was behind.”

Recording began during downtime in an unrelenting tour schedule with Moss and Butler’s other band, The Duke Spirit. The initial short spontaneous bursts of creativity that led to the ‘Energy You EP’ and the upcoming ‘ZEAL’ album are built as much on musical one-upmanship on Butler and Byrt’s part as they are about developing an original sound.

“We’re basically either trying to make ourselves laugh, or just out bad-ass ourselves,” says Butler. “We play each other synth lines thinking there's no way the other will be into this, and they’re pretty much always the ones we go with.”

“The whole process is all in a bit of a vacuum of fun—floating in beats, glitches and bass tones, which to me are fresh territories to roll around in,” adds Moss. “The good and the bad, and the yes or no duality of previous writing has been chucked out of the window and we’re just writing in the moment and letting the kinetic energy bounce off the walls and spin us in different directions.”

The lyrical references and imagery regarding all aspects of Mother Nature—particularly on the lead track, 'This Stone Is Starting To Bleed', along with the EP’s 3 other tracks, ‘True Nature,’ 'Sweet Dreaming’ and 'Crown Upon My Head'—echoes Roman Remains’ organic writing process.

“They are born out of my experiences of the last two years or so, which if I think back were spent outside and in a pretty observant and aware frame of mind,” contemplates Moss. “Spending a lot of time in Los Angeles where you see all that orange and purple bougainvillea caress the sharp edges of those crooked cement sidewalks, to a steep glossy green mountainside village in the Himalayas where I spent a month last monsoon. I've had headphones on listening to Toby's instrumentals in these and more random places, sucking in all the vitality billowing around me. You cannot miss out on the metaphors that all the terrain and color provides. I've fallen out of love with the city after a long addiction with it, and I just want to cut loose over some open spaces these days. I want to go Feral and I can in this new record.”

‘Roman remains move with the effortless ease of a band that has no boundaries other than those set by Moss and Butler’s own desire for perfection. As they prepare to take their next step with the release of their debut album, their journey of exploration continues on an apparent path that knows no end.