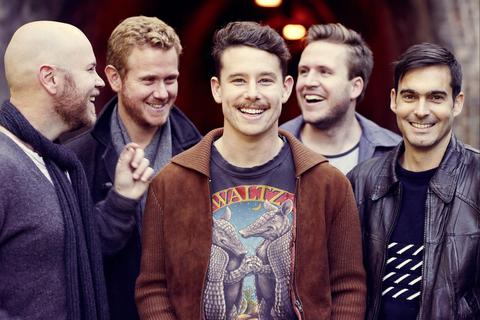 BOY AND BEAR
Harlequin Dream
Within weeks of finishing work on 2011’s award-winning, internationally renowned debut LP, Moonfire — months before it was even released — singer / songwriter Dave Hosking was hit by a creative tsunami. Boy & Bear is a band that likes to follow their muse — and the new songs were flowing.

The cocoon-like existence of working together in a strange new environment — Nashville, in the case of Moonfire — generated its share of magic, but Hosking and his fellow Boy & Bears wanted to bring it all back home, to get back to where their musical journey began in 2009. His band mates Tim Hart, Killian Gavin, Jon Hart and new(ish) addition, bassist (and table tennis ace) David Symes, agreed. ‘Good art is personal,’ says Hosking, ‘it comes from a really personal place. These new songs started in my living room, and it made sense to keep this local, and let our personalities and experiences filter into the record.’

The record in question is Harlequin Dream, their bold and brave new album, conceived and ‘birthed’ in their hometown of Sydney. And they couldn’t have picked a more appropriate venue in which to make the magic happen: the legendary Alberts studio, the spiritual home of AC/DC, the Easybeats and many, many other homegrown legends. It may no longer be in its original CBD base, but Alberts remains Oz music ground zero, a sacred site. The perfect place for Boy & Bear to make their new musical statement, with the able guidance of ARIA award winning producer Wayne Connolly, who the band first met when they worked together on a cover of Neil Finn’s ‘Fall at your feet’, a live favourite and a hit single. ‘Once we got home from Nashville,’ Hosking continues, ‘we thought, “Bugger it, let’s do it more effectively next time.” ’ Alberts proved to be just the place.

Drawn from a number of sessions dating back to October 2012, recording Harlequin Dream was a totally different sensation for the band. No longer was their only escape from the studio a late night trip to the convenience store for chips and beer, as it had been in Nashville. This time they worked almost regular hours and went home to family and friends. Lived a real life. Their music only went offshore when takes were sent to Phil Ek in Seattle, who’s worked with such bands as Band of Horses, Fleet Foxes and Modest Mouse, to be mixed. It was the perfect arrangement for this very Sydney band.

‘With Moonfire,’ says Hosking, ‘we were trying so hard to not sound like other bands; it was such a driving force, trying to find our identity. This time around we just followed what we felt was musical and embraced more pop structures.’ Guitarist Killian Gavin feels it’s an ‘older sounding record’ than their debut. The lead single, ‘Southern Sun’, has a powerful urgency, not unlike the best of Bruce Springsteen or Fleetwood Mac, while a sprinkling of strings and brass — played by living, breathing humans, not machines — brings life and colour to such standouts as ‘Back down the Black’, ‘Old Town Blues’ and ‘Stranger’. There’s even a swinging sax solo on title track ‘Harlequin Dream’, a first for the band.
‘Sharing some music from the 70s was a clear decision that we made,’ says Gavin, when asked about the inspiration for much of the album. ‘What we’ve made feels older and more rounded than the first record. It’s more pop, less folk.’ Moonfire connected with a huge audience. The record took them to some places they never thought they’d see, including several tours of Europe and America. And any debut that claims five ARIAs, including Album of the year, clearly had something going for it.

‘I didn’t honestly think I’d ever be at the ARIAs, let alone winning any,’ says Tim Hart, with no small amount of wonder. ‘It wasn’t even on our radar, but it blew me away.’ In typical Boy & Bear fashion, they resumed touring the day after their big night. There were standout gigs at the Paradiso club in Amsterdam — just metres from where the Church’s ‘Under the milky way’ had been conceived — and at the Falls Festival, where their new song ‘Southern Sun’ came to life, and in places as far-flung as Sweden. They were even mistaken for Flaming Lips’ groupies by Wayne Coyne, who kept bumping into the band in airport lounges.

‘It’s really cool to do something you love,’ Hosking figures, and rightfully so, ‘and it’s even cooler when it becomes your ticket to seeing parts of the world you may not ever see.’
‘For me,’ adds Gavin, ‘getting up on stage and seeing a lot of people singing your songs . . . it blows me away. How do you know us? Why do you like us? It’s great.’

‘When the band becomes such a big focus in your life’ says Hosking, a man who chooses his words with the same care he uses to craft his songs, ‘you get so embedded in it. You can isolate yourself a little bit. It’s exciting, but when you get back home you realise your family and friends are getting on with their lives. You have to be careful about not neglecting those other parts of your life. You have to get that balance right.

‘I think that’s a recurring theme with the record.’ ‘It sounds different,’ sums up Jon Hart, as talk returns to Harlequin Dream. ‘I get a great vibe listening to these songs — it makes me tap my feet and nod my head, it gets me in. It’s an energy thing. I couldn’t tell you the formula,’ he says, looking at his Boy & Bear bandmates, ‘but it works.’