Mike Peters of The Alarm 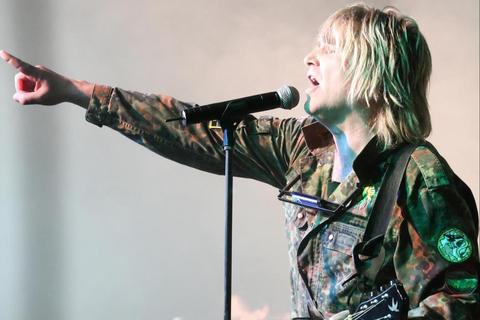 “Will Never Die” – Three words of intent from Mike Peters and The Alarm’s evergreen 1983 single ‘Sixty Eight Guns’, the epicentre of the band’s worldwide hit album ‘Declaration’ which celebrates it’s 30th anniversary in 2014.

A unique one man band ‘Alarm’ show, lead singer / songwriter Mike Peters will present the album in a contemporary setting with performance, stories and images to highlight the impact that this album had on the decade it was born in, and its ongoing relevance, as Mike Peters continues his personal fight against cancer with the Love Hope Strength Foundation ‘Saving lives – One Concert At A Time’.

Upon release in February 1984, Declaration debuted at number 6 in the UK charts, achieving gold record status before becoming a top 40 hit in the USA. The Alarm’s sound was powered by unique electro-acoustic guitars that no one had seen before, prompting Rolling Stone Magazine to write “One of the best new live bands…, and they’ve put a lot of that power into their first album”.

The album itself, was a pioneering mix of protest punk, folk, americana and stadium rock as described by US reviewer Jim Connely in 1984′s Dead Air Diary “While a lot of bands have tried to combine the ’60s and ’70s, none of them have been as successful as The Alarm. Musically, their secret is that they draw on Punk and then temper it with an acoustic sound while avoiding the wimpiness usually associated with folk. Lyrically, it works because they avoid Punk nihilism and concentrate more on positive personal politics. This is rock and roll at its very finest and U2, R.E.M. and the rest are going to have to work very hard to top it”.

In 2014, 30 years on from the original release of the album that brought Mike Peters and The Alarm to the attention of the world, Mike is still challenging that same audience through the outreach of his music and charitable actions and literally living out the words that open the Declaration album ‘Take this song of freedom, put it on and arm yourself for the fight, our hearts must have the courage to keep on marching on and on”.]

Mike Peters (who is a two times cancer survivor), formed The Alarm in 1981, first becoming successful soon after with classic singles such as ‘The Stand’, 'Strength' and ‘Rain In The Summertime’. Achieving 15 Top 40 UK singles and over 5 million album sales worldwide, he has also sung with some of history's greatest performers such as Bob Dylan, Neil Young & Bono.

Through his charity Love Hope Strength, Mike has organised and participated in some of the world's highest concert events performing at 18,500 feet on Mt. Everest (2007), Uhuru Peak on Mt. Kilimanjaro (2009), Japan's Mt. Fuji in 2010 and at the 'Highest Concert in Britain' on the summit of Ben Nevis in Scotland.

In 1992, Mike Peters and The Alarm became one of the first bands to have a dedicated internet site www.thealarm.com and in that same year, founded The Gathering, the annual Mike Peters-hosted 'Alarm' event held in North Wales which now attracts fans from all over the world.

In 1996, Mike Peters world was literally rocked to the core when he was diagnosed with Non Hodgkins Lymphoma whilst on tour in the UK. Rejecting conventional treatment, Mike Peters went to see a faith healer instead and as a result of being told that 'green' was a powerful colour in his life, took to wearing green combat fatigues on stage every day whilst continuing to tour extensively throughout, Europe and USA until he eventually went into spontaneous remission.

In 2004, the Alarm released their first single in many years, the soon to become notorious '45 R.P.M.’ The track was released in the U.K. under the pseudonym 'The Poppy Fields' and entered the UK charts at number 27, immediately becoming the subject of an international news story. The furore centered around the fact that The Alarm's identity had been kept hidden from the media and instead a stand-in group of 18 year old musicians appeared in the video.

'45 R.P.M.' was played throughout the UK and championed by unsuspecting DJ's and critics as the first release by a brand new band. It was only after the song entered the charts that The Alarm revealed the true identity of 'The Poppy Fields', thus causing a storm of worldwide media speculation with the band featuring on prime time America's CBS News with Dan Rather. The story is the inspiration behind 'Vinyl', a motion picture (recently released in 2013), starring Phil Daniels (Quadrophenia) and Keith Allen (Trainspotting) with an award winning soundtrack recorded by Mike Peters and The Alarm.

In 2006, Mike Peters' continuing life journey entered into its darkest phase when, just days before releasing the follow up to '45 R.P.M.' ('Superchannel' which would also chart at number 28), he was diagnosed with Chronic Lymphocytic Leukaemia (CLL). Throughout a six month spell of hardcore chemotherapy, Mike again continued to play and perform as much as he could, taking to the stage each time in his trademark 'green' combat fatigues and making the first steps in beginning the Love Hope Strength Foundation by leading a host of Alarm fans to the summit of Mt. Snowdon in Wales to raise funding for the local cancer care centre in North Wales that had helped put Mike on the road to recovery. A revealing and insightful BBC documentary was screened in October 2007 chronicling Mike Peters' inspiring story.

In 2010, Mike took up the challenge to sing with Big Country taking the place of his long time friend Stuart Adamson who had passed away so tragically in 2001. Mike and Stuart both met whilst on stage with U2 at Hammersmith Palais in 1983 and had sung together at Big Country's last ever show at Glasgow Barrowlands, Scotland in 2000. Mike's appointment to the band has been met with universal praise with most reserevd for the respect and dignity brought to an almost impossible situation.

In 2013, Mike touried with both The Alarm and Big Country releasing albums simultaneously. it's no wonder Mike is often dubbed by his friends and fans as 'the hardest working man in rock' and remains as passionate as ever about his music, Wales and charity Love Hope Strength www.lovehopestrength.org

When Mike was first diagnosed with cancer in 1995, quitting music wasn't an option and he is now in his second remission from Leukaemia and still challenging himself and his audience through music and the outreach of his charitable actions. In his own words and from the title of one of his own songs "Never give up without a fight".