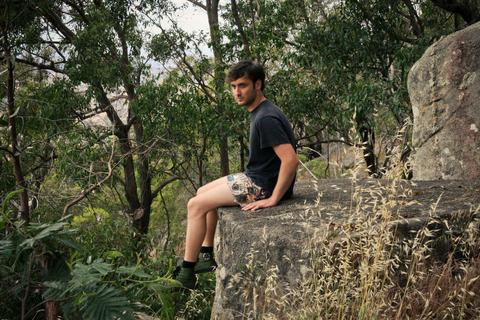 "'Tropical Oceans', indicates a love of wistful indie-pop and the blues, with nods to both Grizzly Bear and Dirty Projectors in its arid, thumping beat, marching tempo and gusty melody. Toss in some oddball couplets, sung in Oliver Hugh Perry's half-mumbled thrum, and you've a recipe for a bona fide weird-pop hit.’ - NME

Hailing from somewhere in the vast wilderness outside of Melbourne, Australia, D.D Dumbo (aka Oliver Hugh Perry) is slowly making waves outside of its caves via early press attention from the likes of The Guardian, KCRW, NME, Pigeons & Planes and airplay on Australia’s triple j, RRR FM and FBi radio.

D.D. Dumbo performs solo with a 12 string electric guitar and loop pedals and is quickly gaining attention as one of the country's most exciting live acts.