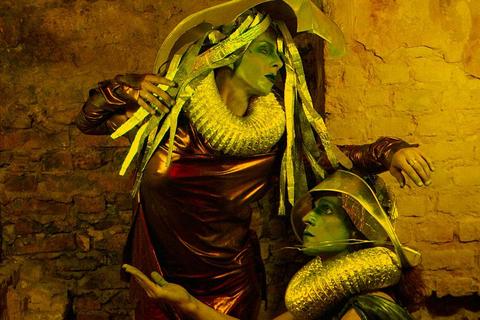 HYENAZ are bottom-feeders on the surface of a planet eating itself; exquisite creatures whose soundscapes spring from the surplus and detritus of civilization’s cultural and consumerist material.

The beats and basslines lift from early house, so-called “IDM” and R&B the vocals from soul, blues and prog-rock; the lyrics are punk poetry, cutups — the calls of a cybernetic siren. Synthesizers are built from discarded scraps of metal and 90s nostalgia. Their performance, their visual art and their texts cull from the discarded fabrics of their surroundings, felt and reinterpreted through their bodies. HYENAZ are one, defiled and immaculate, their androgynous flesh quivering on the thin edge between the digital and the divine.

Their first release slices through the core contradictions that lie in contemporary music, the liminality of time and instability of the twenty-first century human body.

HYENAZ are one, defiled and immaculate, their androgynous flesh quivering on the thin edge between the digital and the divine.

HYENAZ began in February 2013 when performance artist Mad Kate met musician and producer TUSK in the Czech wilderness. Mad Kate (www.alfabus.us) has worked with Peaches, Bonaparte, DJ Hell and Voluptuous Horror of Karen Black. TUSK (www.tusklives.com) collaborates with such Berlin illuminaries as Scream Club, aniaetlagprogrammeur and Alexander Geist and been called "an ambassador of underground synthpop esoterica" by Time Out Lisbon.

The bare bones of their collaboration was thrashed out in two ecstatic weeks in the basement of a rickety mansion and refined over the following ten months at Pale Music in Berlin. The pair have already toured extensively through clubs and festivals across Europe including Reich und Schön in the German countryside, Control Club in Bucharest, Romania and Boney in Melbourne, Australia.