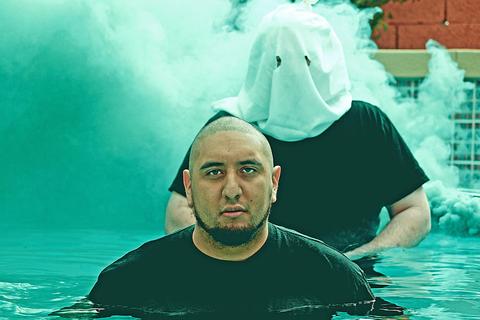 Moodie Black has seemingly appeared out of thin air, rising from disintegrated dusting's of a newly popular genre- noise rap - with a recent featured article in international French publication New Noise, a Death Grips remix, and collaborations with emcee Dalek, Moodie Black has stirred some curiosity.
Shaped and formed in the deserts of Arizona, Moodie Black pulled themselves from the dust, undaunted by criticism for their abrasive sound and controversial stage shows since 2004. Regarded as a legitimate pioneer of mood in a very small class of noise rap (Death Grips, BLACKIE, Dalek), the band's unorthodox approach to production, mixing, and live performance has begun to be recognized by the human masses. Outfitted with disembodied baby heads tethered to gold chains, Moodie Black is visceral, melodic, and of course devastatingly moody. The duo- fronted by menacing figure "K." (Chris Martinez) and backed by guitarist Sean Lindahl- have audiences anticipating Moodie Black's upcoming album, N A U S E A , the follow up to the critically acclaimed Sana Sana, and the first major release for the band on Fake Four.

With a 2013 that included 2 national tours and a European tour that showcased Moodie Black's intense and visceral live performance, 2014 looks to be a break out year for this noise rap collective. N A U S E A is set to debut on April 22nd with a more extensive European tour to follow in May.