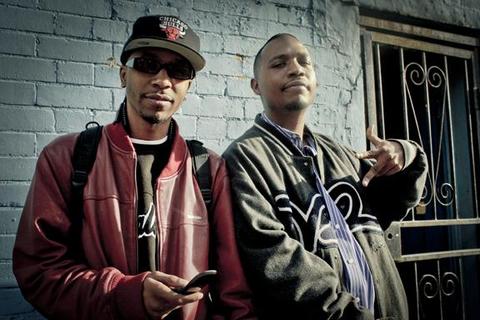 Chicago kingpin DJs Spinn & Rashad have been quintessential figureheads in the evolution of Ghetto House to Footwork and its predecessor Juke. Consistently progressing the style, Spinn & Rashad have been a bastion of the sound. Their contributions have acted as blueprints and remain indispensable. Their open production approach has helped them craft a unique brand of Footwork that is deeply rooted in Chicago's history of House as well as Soul, Funk, Jazz and Hip­Hop, simultaneously pushing the boundaries of House music into entirely new regions.

The Duo met during homeroom class at Thornwood High School in 1996 they quickly began producing tracks at each others' houses using any sampler or drum machine they could obtain. During this era, they DJ'd parties with the likes of RP Boo, DJ Clent, Gant­Man, Poncho and various essential Dance Mania DJs including DJ Deeon, Jammin Gerald, DJ Funk & DJ PJ. Their first release to make it to wax was in 1998 on Dance Mania ­ "DJ Rashad: Child Abuse/DJ Spinn: Motherfucker" [DM255] (mislabeled as DJ Thadz). Rashad and Spinn remained close counterparts, crafting the sound that is heard today along with contemporaries such as RP Boo and Traxman. Rashad and Spinn founded theGhettoteknitianz. At present, the clique is the largest in the city, well over a dozen strong producer wise.

DJ Spinn and DJ Rashad have more recently founded a DJ & production crew called "TekLife". TekLife members are veteran DJs & producers who reach back and mentor younger DJs in the music business as well as the business of being a DJ and Producer. There are TekLife factions now in every major city of the US, UK & Europe and they are growing. The Tekz music has been featured on national TV shows such as NBC's "Ellen Really BIG SHOW" BET'S 106 & Park Wild Out Wednesdays and the "Footworkingz Take Flight" DVD.