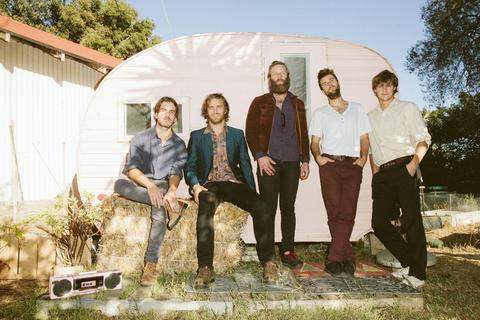 The crystalline, aha moment, if you can picture it, comes after a month of dogged recording in a converted warehouse in the middle of the bleak Midwest winter — foreign and dissociative terrain for Gardens & Villa, whose members are more accustomed to the warm breezes and surf of their Santa Barbara, California, home. The recording situation itself couldn't have been more ideal for unbridled creativity, as G&V was locked away with acclaimed producer Tim Goldsworthy (Cut Copy, DFA Records, Hercules & Love Affair) and was given full access to gear-nerdery like Sly Stone’s custom-built Flickinger recording console (used throughout There’s a Riot Goin’ On). However, the band had only left the studio space five times during the month, lost in a black hole of music-making. As their time with Goldsworthy drew to a close, with deadlines looming and personal woes creeping in, the band found themselves anxious, stressed out, sad. They needed a natural remedy -- an escape into the wilds of Michigan.

Members Adam Rasmussen, Chris Lynch, Dusty Ineman, Levi Hayden and Shane McKillop traversed across the winding roads and frigid tundra of Benton Harbor, MI, stopping only when they found its highest point. Their bodies worked with fervor as they summited an expanse of snow-covered sand dunes. The view at the top left them breathless. Here was the great wide world, in sharp contrast to their cloistered recording haze; with the ice crunching beneath their feet, they saw Lake Michigan, stretching across the distant horizon, simultaneously reminding them of home as well as the tyranny of that distance.

Dunes takes both album title and reinvigoration from this scene – but beneath the immediate lies a milieu of influences: random conversations with strangers, hundreds of VHS movies, British tea rituals, and explorations of consciousness and meditative focus. Opposing methodologies between band members make for wonderful tension in songs about the importance of isolation as well as connection, on appreciating the beauty of analog. The band’s vibrant rhythms, fluttering flute melodies, and pulsing synth lines now intersect with more nuance than ever before. In a single stroke on standout "Bullet Train," G&V gives an eerie artificiality to Lynch's flute and embues Rasmussen's synth bassline all the physicality of played PVC piping, flipping the physical and digital. At different points, the record recalls the jerky, blissful funk of Prince ("Bullet Train") and the cold-wave of Depeche Mode ("Colony Glen" and "Thunder Glove") in its outwards-facing dance jams, while piano-heavy tracks ("Chrysanthemums" and "Minnesota") feature complementary melodies that inspire introspection. With the expert assistance of Goldsworthy, Dunes is a record abundant with contrasts, that shares a clear and evocative vision of where Gardens & Villa’s members have traveled, what they’ve learned, and what lies ahead.