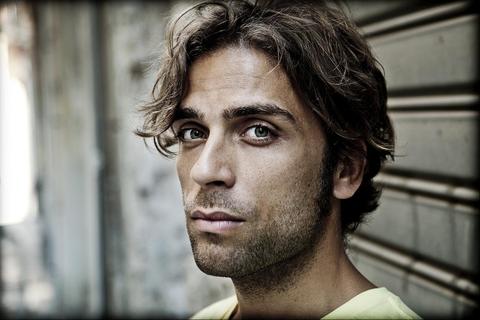 Fabrizio Cammarata is a singer-songwriter and globetrotter, hailing from Palermo, Sicily. Fabrizio's main inspiration is his hometown, but there is Mexico and Africa in his songs, along with Bob Dylan, Fabrizio De André, Nick Drake. Albums and touring, prolific opening shows as with Ben Harper, a movie project about the mystic La Llorona with filmmaker and Wim Wenders' assistant Luca Lucchesi and a spontaneous soul-album with old friends from Manchester are among Fabrizio's manifold activities.

Over the last few years, Fabrizio has been constantly performing all over Europe, US, Canada, Mexico and of course Italy, affecting in solo shows and band line-ups, participating in events like SXSW, LiverpoolSoundCity, MaMA, c/o pop, CMW, Glimps, Eurosonic. He also played with the likes of Patti Smith, Ben Harper, James Morrison, Devendra Banhart, Iron & Wine, Gang of Four, My Brightest Diamond, The Devastations, Depedro, Carmen Consoli, Ely Guerra as well as before and with Daniel Johnston and touring with Josh Haden's Spain – experiences that prove a succeeded conversion of the album's intensity and interesting tone colour on stage.

The second album "Rooms" and its first single "Alone and Alive" is released in EU through the German Panmondial/GrooveAttack gaining a great feedback and airplay. The Album was recorded and mixed between Sicily, NYC, Portland OR and Tucson. It was produced by JD Foster (Calexico, Marc Ribot, Richmond Fontaine, Capossela) and features, among a bunch of fantastic Italian musicians, collaborations by Joey Burns from Calexico and Jairo Zavala (Calexico, Depedro, Amparanoia), mastered in Cologne, Germany by H.Jaeckl.

"Rooms" is very well received around Europe including his home country Italy, where Fabrizio Cammarata is a prominent part of the independent musical panorama. Top reviews and interviews, major airplay and features, as well as great shows build on what was funded by the first award-winning album "The Second Grace", whose single "Antananarive" had MTV- and National Public Radio heavy rotation.
The videos of "Alone and Alive" and "Antananarive" are both directed by the Sergi Capellas (RCR Films, Barcelona).

The recent projects are the album "Skint & Golden", featuring Manchester based long term friend Paolo Fuschi. The first singles already gained rotation on national radio. The album will be released in spring 2014.
Another project is "Send you a Song", a musical road movie directed and filmed by Luca Lucchesi in various episodes around the world, leading to Fabrizio Cammarata's next album, to be released 2014/2015.

“extraordinary songs of a heartwarming beauty”... “This is world music in the true, best sense [...] with arrangements, in which consistently a sympathetic love to the detail can be felt”
Kölner Stadt-Anzeiger (D) on “Rooms” (Jan 12)

"Rooms is like a pure chocolate bar you cannot get enough of"
Koen Nederhof - Festivalinfo.nl (NL)

"beatified the Italians that appear and grow around the world. If there are good guitars, warm sound and Californian songs in that world, even better. beatified Fabrizio Cammarata..." L'internazionale (I)

"a fantastic album, of composition quality, interpretative gift and extraordinary good taste... ten episodes of which you could not call a single one less than (very) beautiful”
Federico Guglielmi, Il Mucchio (I) about “Rooms”

"The young man has a powerful and very expressive voice, his songs are musical diamonds full of melody, meaning and emotion".
Shakenstir.co.uk (UK)

"charming ballads (...) His voice, sometimes pleading (…) sometimes smoothing (…), fits perfectly with the lush arrangements and rhythms that draw their inspiration from the four corners of the world".
La Libre.be (BE)

"At first glance ‘Rooms’ seems a rather plain album, but give it a second chance and it will surprise you in a very pleasant way. And it has to be said: the man has a magnificent voice".
Indiestyle.be (BE)

"Sicilian Fabrizio Cammarata is certainly the most un-Italian singer-songwriter... The singles ‘Alone & Alive’ and ‘All I Know’ need time to convince the listener, but once you reach that point they won’t ever let you go".
Zizo Magazine (BE)

"A lord of the world and always in love with different places. We hope Portugal has touched Fabrizio and we look forward for a justified come back" Palco Principal (PT) about Fabrizio Cammarata-show in Porto.

"Each song is mixed extraordinary well with sounds and rhythms from Africa, India and even Cuba. However the Latin essence is there, in the way he sings, in his lyrics and, of course, in his appearance which will not be indifferent to the Portuguese hearts" Le Cool Lisboa (PT)