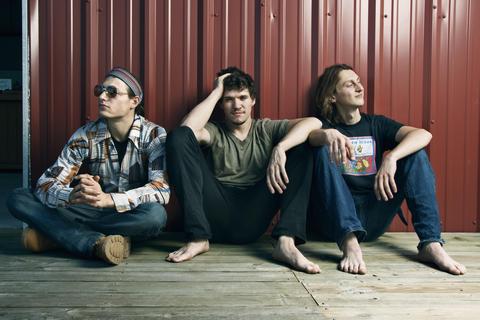 The reaction is instantaneous. It doesn't even matter when they're the opening act no one in the room has heard before -- as soon as Moon Hooch starts playing, it's as if the room becomes a living, surging, pulsing thing. They call it "cave music": like house music, but more primitive and jagged and raw. But there are no DJs or manufactured beats here -- just one drum kit and two saxophones.

Moon Hooch -- saxophonists Mike Wilbur and Wenzl McGowen, and drummer James Muschler -- met while all three were students at The New School for Jazz and Contemporary Music in New York City. They found in each other a similar drive to work hard, practice, and create new, unusual sounds with their instruments. They first played in the summer of 2010, busking in front of the Metropolitan Museum of Art.

Later that summer, the band set up to play on the L train subway platform at Bedford Avenue in Brooklyn. Above ground and a few blocks way, Modest Mouse was playing a concert at the Williamsburg Waterfront, which was rained out just a few songs in; hundreds of hungry music fans flooded the subway and stumbled upon Moon Hooch -- initiating an impromptu underground rave, along with a habit of having their platform parties shut down by the police. (They've since been banned from playing in the Bedford station by a weary NYPD. Fortunately, there are plenty of other, friendlier stations... for now.)

The "cave music" sound developed around an organic approach to playing electronic dance music. The looping, frenetic sax melodies and James's furious drumming are fierce and trance-like, as Mike and Wenzl rock back and forth, pushing and pulling each other from across the stage. Sometimes Wenzl switches over to a contrabass clarinet, or inserts a long cardboard tube into the bell of his sax to create the deep, throbbing womp of a dubstep bassline. It's manic, and thrilling, and perhaps a little bit evil.

One time, someone hollered at them between songs, "What are you called?" The trio didn't have a name yet, but Mike blurted out "MOON JUICE!" It seemed like a good fit, until they Googled the name and found a number of other bands were already using it, so a few minutes of thesaurus-diving yielded a suitable synonym for "juice," and Moon Hooch was born.

They recorded their self-titled debut album at The Bunker Studio in Brooklyn in the space of one 24-hour period. Their fanatical rehearsal regimen and hours-long busking sessions had prepared them well; most of the 13 songs were recorded in a single take.

After several months of busking on New York City subway platforms, Moon Hooch was spotted by former Soul Coughing frontman Mike Doughty, who was so taken with them that he invited them to open his national tour. That immediacy that served them so well in the underground translated nicely to rock club stages, as Moon Hooch began building a fan base across the country. Early in the tour, the band asked an audience in Harrisburg, Pennsylvania, if anyone had a floor they could crash on; the couple who offered their house joked that the band's music would make a great alarm clock. Well, the Hooch abides: at 9 AM the next morning, Moon Hooch was set up in their living room, and brought them dancing down the stairs to greet the day. (Lest you think this apocryphal, the whole thing's on YouTube.)

The band continued to play shows above ground, including gigs supporting Galactic and a CMJ showcase with the Soul Rebels and Maceo Parker, and U.S. tours supporting Lotus and They Might Be Giants. In the summer of 2013, Moon Hooch will graduate from busking at the ferry dock during New York's Governor's Ball Music Festival to playing the festival itself. And their album, heretofore only available from the hand of a band member at gig, will finally get wider distribution when it's re-released by Hornblow/Palmetto Records in June, with a new song added for good measure.

By organifying electronic music, by producing synthetic sounds with acoustic musical machines, Moon Hooch creates hope that anything synthetic can be replaced with something organic.

The show at Holy Mountain Backyard on Friday, March 14