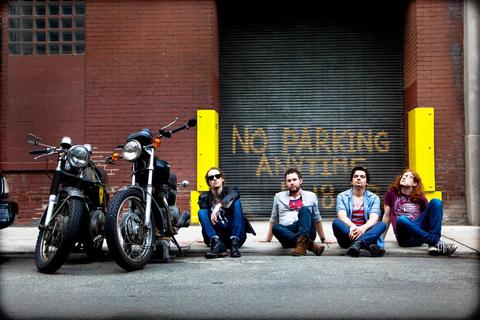 Listen to The Gun

You can't move forward without knowing where you've been.

Taddy Porter certainly recognizes where they came from and, in turn, where they're headed. Even while
progressing, the Stillwater, OK rock outfit consciously connected to their roots physically, sonically, and
spiritually on their second full-length album, Stay Golden [out February 26th via Primary Wave Music].

"We wanted the title to pay homage to Oklahoma because it's our collective home," explains singer and
guitarist Andy Brewer. "At the same time, it gives a broader idea of our view on life and nods to that line
in The Outsiders, 'Stay gold, Ponyboy.' It's about holding on to your innocence and optimism. You've got to
stay golden in the face of life's curveballs, and stay true to yourself. As a band, that’s was our singular goal
when we set out to make this album. We needed to remain true to the music we want to make.”

Embracing that mindset, the group found themselves evolving and experimenting with a more expansive
and eclectic rock soundscape, all while still managing to preserve the foundation they established on
their acclaimed 2010 self-titled debut. This time around, they distill elements of Southern blues, Motown
soul, raw rock, and psychedelic pop into eleven intoxicating and irresistible songs. Taddy Porter—
Brewer, Joe Selby [lead guitar, backing vocals], brothers Doug [drums] and Kevin Jones [bass]—cruises
seamlessly into this next chapter, and everyone's invited along for the ride.

In January 2012, the quartet hunkered down in a Nashville studio with producer Dave Cobb [Chris
Cornell, Shooter Jennings] and producer/mixer Mark Neill [The Black Keys, Dan Auerbach] to record,
before eventually finishing a few tracks in San Diego. Cobb and Neil, co-producing together for the
first time, each brought a unique arsenal of sonic weapons to the recording process. Their combined
firepower left an indelible mark on the overall vision & vibe of the music.

Raiding Cobb's impressive collection of vintage gear and his encyclopedic knowledge of music, the band
tapped into a warm sound that evoked their influences and simultaneously conjured a new vitality.

"Dave saw where we were going with the tunes and helped us zero in," explains Selby. "He'd pull out
records for us to listen to that were incredibly inspirational. We ended up listening to The Zombies, The
Kinks, and these amazing late British Invasion bands.”

The first single "Fever" stands emblematic of the group's progression. A robust beat gives way to a
swaggering, sexy guitar groove punctuated by organ, thumping bass, and Brewer's soulful delivery.
Lyrically, it's a sweaty admission of yearning for an unattainable vixen.

"It's an observation of an untouchable girl who can't get enough of the nightlife," reveals the
vocalist. "You want her, but you can't have her. While she's sexy and has everything that will make you go
crazy, she'll never let you get close enough to figure her out. You can't get enough of her, and you've got
the fever." You'll have the fever too once you hear it.

On the other end of the spectrum, "Changes" boasts an anthemic revolutionary chant, a fuzzed-out wall of
reverb, and a searing solo courtesy of Selby.

Brewer adds, "When we were working with Mark and talking about the direction our sound was taking,
he kept joking around in this Southern accent and saying, 'There's going to be some changes made
around here.' We were just screwing around, but I thought that would make for the perfect hook so we
recorded it. It also spoke to the changes we were making as a band. In our opinion, we felt the only way
forward for us as a band was to explore these new musical avenues.”

On "The Gun (Part 1)," the band tells a cinematic Spaghetti Western-style story of a hitman on the verge
of vengeance with an airy twang and surf guitar echo a la Dick Dale.

"It's a progressive slow-moving, eerie tune," affirms Selby. "There are certain tones that give it a distinct
feel. It shows another side of what we're doing here."

Of course, this creative expansion didn't happen overnight for Taddy Porter. Since their first record
dropped, the band has constantly turned heads. Their music has been featured prominently in HBO's
Newsroom and Entourage, Showtime’s Homeland, Monday Night Football, ESPN's SportsCenter, ABC,
NBC and more. They shared the stage with everyone from Slash to Band of Skulls, and released a video
starring Steven Tyler's daughter Chelsea Tallarico for "Long Slow Drag." But after touring non-stop and
playing more than 250 shows in a year, the band took stock of the course they were on.

"With the first record, everything moved really fast and we appreciated everything that was happening.
But we were unsatisfied creatively and began to realize that we had to get back to our roots and just be
more honest with ourselves about the music we wanted to make,” admits Brewer.

And so, the songs on Stay Golden were born. The album points not only to Taddy Porter’s intrinsic
identity but who they will ultimately become. Change is scary but it is part of everyone’s journey. "Our
first goal is to spread a positive message," Brewer concludes. "We want people to stay true to themselves
and follow their own impulses. It's okay to change because that's our very nature. At the same time, you
can also get down and dance to the music. We’ve learned that you feel so much better when you can just
do what you want."

The show at Avenue on Congress Rooftop on Tuesday, March 11