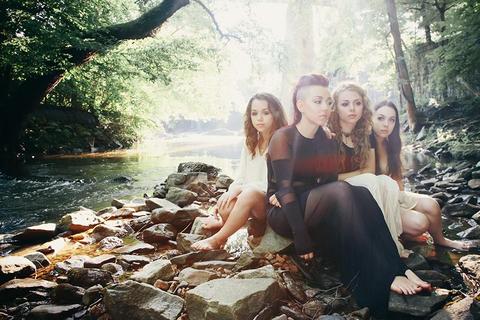 Atlanta-based indie-alt-folk group von Grey has checked off more things on the proverbial band wish list in the past year than many bands do in a decade. National TV? Check. They've appeared on "Late Show with David Letterman," "Conan," NBC's "Rock Center with Brian Williams," and CNN's "Road Warriors." Glowing press? Check. The harmony-laced foursome has been called everything from an "Americana masterpiece" to simply "crazy- talented" by the media. Great tours? Check. The group has opened for Indigo Girls, Sarah McLachlan, Lindsey Stirling, Rusted Root, and Company of Thieves, and performed standout sets at SXSW, Bonnaroo Music & Arts Festival, and Gathering of the Vibes Festival. Top 10 record? They can check that off too, as their 2012 self-titled EP shot into the iTunes Top 10 following their memorable "Conan" performance. And, the group of four classically trained sisters has accomplished all of this without the help of a record label and before their 20th birthdays.

"We're so grateful for it all," adds Fiona. "We have been honored to receive overwhelming support from so many directions. There are moments - like when you first hear the words ‘von Grey’ coming out of David Letterman’s mouth - that make it easy to take things for granted and forget how fortunate you truly are to be in those situations. We’re really focused on trying to stay engaged and making sure that we are taking everything in, enjoying the moment, and actively appreciating the opportunities that come our way."

These experiences have shaped von Grey's new, independently released six-song EP, Awakening, adding to their list of life experiences stemming from over 300 performances in the past few years. "Being put in new situations and environments on a routine basis forces you to expand your personal outlook. Songwriting helps you to recall those experiences and make sense of all that you witness and feel,” says Annika. “The more we travel, we realize that we are part of a pretty big and complex world. We have been exposed to an expanding range of environmental, social, and musical elements. Those experiences have helped shaped this new EP both thematically and sonically. The last EP had songs about romance and angsty love ballads. We focused on how we allowed others to make us feel. Awakening is personal in a way that feels more delicate, because it's about an awakening from within. It is a batch of songs that were born out of meditative self reflection."

"Keep It Cool," features a line that embodies that message and ultimately inspired the EP title - "awakened, opened our eyes." A depth beyond their years runs throughout von Grey’s masterful storytelling and songwriting. "Keep It Cool" tells us that we don’t need to obsess over the entire universe to simply be happy. "Deliverance" is about trying to find meaningful concepts to latch onto and use as a guide through life. "Ashes" is about global deforestation and was written after the band observed clear-cutting of massive forests in the Pacific Northwest. "Upset Me" delves into a romantic situation that awakens you, while "My Reflection" plays to the girls' more fantastical side, inspired by the character Gollum from Lord of the Rings. In true von Grey manner, the song’s meaning goes deeper, acknowledging the dual nature we all have within ourselves.

But, it's the infectious first single "Come On" that truly takes von Grey in new directions. "We were eager to write a song that was a bit more positive and light. It has a more pronounced major key melody than most of our material, and is pretty uplifting on the surface. It reminds us that it’s both rewarding and crucial to channel our consciousness into something positive and productive," says Annika.

Naturally, von Grey's sound has evolved significantly from the more acoustic-based alt- folk feel of self-titled EP, which was recorded with GRAMMY® award-winning producer/engineer Nick DiDia (Bruce Springsteen, Train), and their live acoustic vinyl LP, "Live at Criminal Records 01.01.13," released in Spring 2013. On Awakening, von Grey expands upon that acoustic foundation, but also branches into musical forms of self-expression that are a little more experimental in nature, beautifully blending the acoustic world with a more modern electronic feel. "We're in a constant state of evolution because our spectrum of influences and our emotional and personal development as individuals is always continuing to grow," explains Annika.

With the musical guidance of producer Rick Beato (NEEDTOBREATHE, Trey Anastasio, Shinedown, Charlie Mars), the group took its sound to a new level on Awakening. "Rick understood our vision for this record, and allowed us to assert our opinions so that the EP really displays our own creative decisions," says Fiona. "He helped expand our knowledge as far as sound effects go and showed us how you can take a keyboard sound or a violin solo and manipulate it and layer it to create cool effects. We were eager to explore the juxtaposition of raw acoustic instrumentation with a few added electronic sounds to give it more of a modern edge."

What's next on the band's wish list? "We want to continue to grow as a band and make music that emotionally connects with people," adds Annika. Just one listen to Awakening suggests von Grey’s list will soon be sporting another check mark!