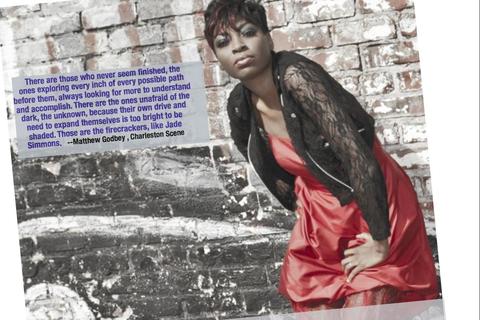 What do you get when you mix 2 parts classical virtuoso, 1 part musical chameleon, a whole heap of feisty and a dash of daring? You get Jade Simmons, one of the most exciting and versatile artists on the scene today. Essence magazine featured the pianist alongside First Lady Michelle Obama and Olympic gold medalist Gabby Douglas on their first-ever Style & Substance List. Ebony magazine considered her one of the Top 30 Leaders under 30, Houston Press dubbed her Houston's Best Arts Ambassador and music critic Greg Sandow affectionately labeled her Classical Music's No.1 Maverick.

The chip on her shoulder from coming in 2nd at Miss America causes her to constantly go after wins and right now she's winning with an incredibly diverse mix of rep from the Classics to the cutting edge. Audiences have come to expect creative projects backed by riveting performances. Jade released her debut CD in March 2009 for eOne Music (formerly Koch Ent.) entitled Revolutionary Rhythm, praised by Allmusic.com as "a thought-provoking, entertaining, and fun debut that easily establishes Simmons as a major talent."

Yamaha calls Jade a "musical force of nature" who has toured the US extensively playing recitals in designer gowns, nightclubs donning sweaty leather, the White House, Ravinia, the DIA and everything in between. September of 2012, at the Apple store in Soho, the classical darling dared to debut her rap skills in the land of Jay-Z while celebrating her newly founded label Superwoman Records and the release of her genre-smashing EP Playing with Fire.

Her son is literally Superman as he's the son of Jahrell and now after the birth of her daughter Supergirl, Jade's readying for a much-awaited return from hiatus in the form of Romejii, a stunning one-woman show that sees her going from Rachmaninoff to Rap in one fell swoop. Parts of Romejii's dynamic soundtrack that includes jaw-dropping classical music, playing the heck out of the piano's innards and working magic with loop pedals will make its debut at SXSW 2014.

The show at St David's Bethell Hall on Friday, March 14

⋆ 12:30AM Jonny Kaplan and the Lazy Stars