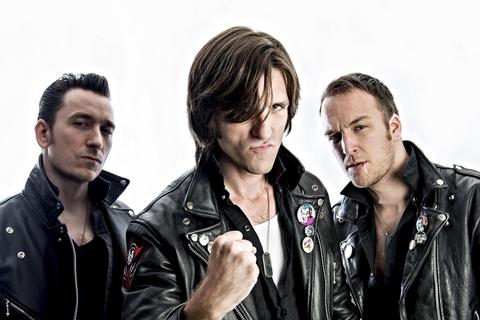 Listen to I Wanna Be A Vigilante

"I think CALABRESE is one of the top Horror Rock bands I have heard."
– Blasko (Bassist for ROB ZOMBIE and OZZY OSBOURNE).

CALABRESE has been headlining the top venues, clubs and festivals of the world for years. This road-tour polished band hails from Phoenix, three brothers whose love of comics, dark movies, and music led to becoming professional musicians. Their recordings and compilations number in the dozens. Their musical influences include The Misfits, Black Flag, Black Sabbath, White Zombie, Samhain, The Damned, Danzig, and Ramones. CALABRESE's songwriting and musicianship allows them to cover the full range of Horror/Death Punk to Rock 'N' Roll.

"CALABRESE is not just a band that is helping to keep horror punk alive, they're also helping to keep real rock music alive."
-Eric Powell
Comic book artist and writer, best known as the creator of "THE GOON" for Dark Horse Comics.

Their latest CD Born With a Scorpion's Touch can be found wherever music is still sold.