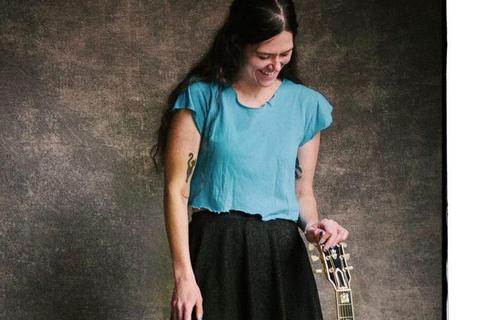 Lilly Hiatt’s a young woman wise beyond her years. Listen. You’ll hear.
Hiatt’s songs back equal measures edge (“3 Days”) and energy (“Big Bad Wolf”) with stunning lyrical elegance. Clear evidence: The Nashville resident’s buoyant Let Down. Hiatt’s seamless debut fortifies earthy (“Master”) and ethereal narratives (“Oh Mister”) with storytelling as sharp as a seasoned songwriter (“Young Black Rose”). Youthful restlessness guides the journey. “There was a self-loathing theme throughout all those songs, hence the title,” the 28-year-old explains. “It had a lot to do with being in the first half of my twenties and being in this transition from child to grownup. It’s kind of like hitting puberty again.”
If discovery defines early adulthood, Hiatt certainly spent fair time seeking out songwriters far and wide to shape her own vision. “John Prine’s always a good place to go for inspiration for writing,” she says. “I really like early Liz Phair and Guy Clark and Townes Van Zandt and Neil Young and I’m obsessed with Pearl Jam.” Accordingly, the rapidly rising songwriter’s new collection soars with wild diversity. Hiatt moves and grooves between country-folk (“Championship Fighter”) and gnashing Crazy Horse rock and roll (“Angry Momma”) with an ease that boldly suggests all songs arrive branded within a single and uncompromising genre: Music.
“When people ask me, I usually end up saying I play ‘spacey country,’” she says, “but the lyrics and the band aspect are equally important to me. To me, it’s just singer-songwriter stuff with an emphasis on the band. I guess I’d put it in the indie or Americana or country category, but I’m just as big a fan of rock and roll. That’s what I’m trying to get at eventually.” Either way, Hiatt’s endless lyrical and musical searching scarcely wavers throughout Let Down.
Rewind “Knew You Were Coming.” Now, turn up the volume. Words dampen stereo speakers with tears so painful and pure. “And I felt like a woman, working and trying to fill in the blanks that come with someone dying,” she sings on the perfectly circular coming-of-age confessional, a song written as sharply as Lucinda Williams and sung as sweetly as Patty Griffin. “And I knew you were coming and I knew I was ready, but the hills were on fire and the heat was so steady.” Fighting through angst. Sounds like an Americana songwriting icon we all know whose composure, as Lilly sings, sometimes “turns to country gravel.”
His name: John Hiatt. Lilly’s bond with her father runs deep. “My dad definitely serves as one of my biggest inspirations,” she says. “I really look up to him. I draw from his music. He’s my hero and always has been and he’s very good for advice. When I was younger, he’d treat it more delicately but now he shoots pretty straight with me. He doesn’t hesitate to give constructive criticism. He’s really supportive and sweet and roots for me.” Her father’s irascible wisdom (“People Don’t Change”) frequently appears on the new album, but Lilly’s hardly a facsimile.
In fact, the collection undeniably shows that she’s an accomplished songwriter in her own right. After all, Lilly’s been writing original songs more than half her life (since age twelve). Let Down only serves as her first official declaration of personal independence and purpose. “To listen to Lilly, you can hear a young artist discovering herself,” says the abum’s producer Doug Lancio (Patty Griffin, Todd Snider, Jack Ingram). “She also has a terrific sense of humor, listens attentively and draws from diverse music, creating a style that is personal and distinctly her own.”