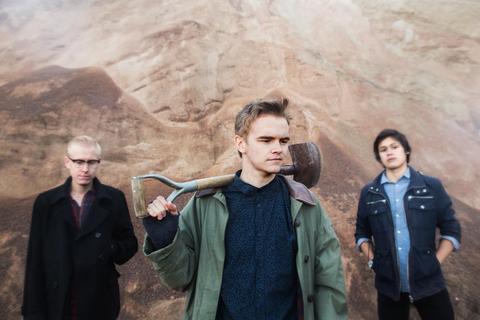 WE MET TOMORROW BIO
WMT - "Our music is everything we want it to be, honest, naked and flawed"

WMT is a young three piece band that’s creating quite a stir both in their native Sweden, as well as the US. Industry professionals and fans agree; this trio should be the next big thing to reach an international audience. With influences from Americana, Blues, Singer/Songwriter, Folk, and Rock, We met Tomorrow combine all of these elements into something vibrant, different and touching, that demands of the listener to take a stand, you cannot remain indifferent to the songs and performance of We Met Tomorrow.

How do three low key young men do this? By creating a powerful live act, by inferring lot’s of strong em0tions to their music and by writing lyrics that are refreshingly original and personal. We Met Tomorrow is the most unique, familiar, different and universally appealing band you have never heard of - yet - but that will be different, tomorrow!

All three members of We Met Tomorrow come from a small town by the coast in the south east of Sweden. The town is known for its heavy industries and a nuclear power plant - resulting in it being crowned ”The Springfield of Sweden” - a reference to a popular TV-show. The bands singer Richard comments:

”We got bored by the music we heard on the radio, and what was being played by local bands in our hometown, so we decided to do something totally different and unique.”

Once the lineup was formed including present members Richard, Carl and Emil, the band started experimenting on creating their sound, for example in the beginning there was no rhythm section which after a while made the trio feel that they lacked a little bit of punch. This resulted in guitar player and lead singer Richard adding a bass drum and a hi hat whilst bass player Emil got a foot controlled crash. This resulted in them getting that sought after punch as well as being able to create more dynamics in their arrangements - not to mention an interesting set up for any audience to watch and experience.

The band has always had a meticulous attitude towards the process of writing and arranging songs. There is no such thing as compromise in what they choose to record and what they play live. In contrast to many young writers and bands it is the lyrics that are the most important and the band even go so far as to state that music is just a tool that helps to express the content of the lyrics. Richard, who writes the lyrics, explains;
”To us lyrics are more important than music. Our lyrics says exactly what we want it to say to the person we want to say it to.”

”We want to challenge the mainstream music scene and show that you don’t need a huge production and a fake image to reach a lot of people, and we want to do this by creating genuine, personal songs with a lot of intrinsic value in music and lyrics”

This quote comes from bass player Emil and display the bands desire to reach a large audience, but to do so without compromising on what made them want to make music in the first place. And listening to We Met Tomorrow you quickly realize that this is just what they have achieved; they write and produce music that is deeply personal with a unique sound as well as it carries a familiar appealing quality that attracts people from all walks of life. Combining this with the mesmerizing live show of these three young men makes We Met Tomorrow something to be on the lookout for - today!

The show at Karma Lounge on Saturday, March 15