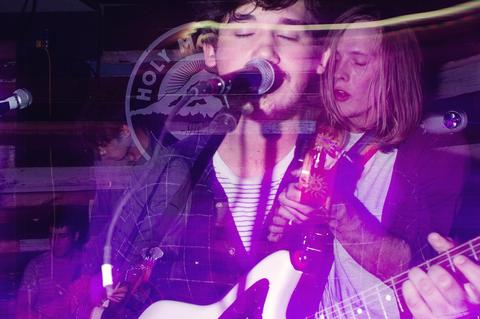 "GROWL is a band making solid indie rock that harkens back to indie’s infancy; the days of round-wound guitars, ride cymbals, shaggy haired dudes with no style or money or girlfriends, just a hard line on how to make a good tune." --Chris Galis, KINDFORM
"They're the kind of indie band that any legit music town needs to have: full chord rock, melodies with words about fleeting moments, exposed youth and plenty of coiled tension. They've got a sound that makes you want to listen to their record collection" -- AXIS Productions

Growl was formed in mid 2011 by Santiago Dietche and Kent Hale after a line of failed attempts at bands had brought them to a standstill. They set out to make indie-rock dance worthy once again, pulling influence from bands like Weezer, Dinosaur Jr, Pavement, Death From Above 1979, and Vampire Weekend.

They payed their dues in wednesday-night Elvis-themed dive bars for a few months as a three piece (Jon Lee, bass) before garnering the interest of Sam Houdek and Alex Cohen, who joined the band on guitar and keys respectively. It was in this 5-piece that they recorded their first EP, Gallery, which was released on 2013. Following their release, they toured around the US and played alongside acts like Dent May, Crocodiles, and Darwin Deez, bringing their afro-garage-pop inspired indie rock to stages all around the country.

Today, Growl just released their sophomore EP, NO YEARS. They will be touring the west coast this summer.

The show at BD Riley's on Tuesday, March 11