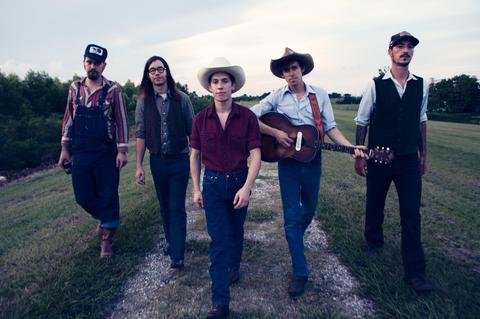 The Deslondes (formerly Tumbleweeds) are a New Orleans-based country-soul, swamp-boogie band. In their writing and performing, they combine elements of early Stax, Sun and Atlantic records with the influence of a more raw, stripped-down sound gleaned off field recordings from Alan Lomax and Mississippi Records catalogue.

In their writing as well as their lives, The Deslondes three principle songwriters—Sam Doores, Riley Downing and Cameron Snyder—endeavor to carry on the traveling country-troubadour tradition of their heroes Woody Guthrie, Hank Williams, Townes Van Zandt, Blaze Foley and John Prine. With the help of bassist Dan Cutler and pedal steel-fiddle player John James, the band’s musical production and vocal arrangements are inspired by the rhythmic, high energy, and harmony-driven sounds of their other heroes, The Band and Allen Toussaint.

Bandleader Sam Doores left his home as a teenager to ramble around and seek out likeminded musicians. Along the road he met Cameron Snyder and they embarked on a road trip to the Woody Guthrie Folk Festival in their outfit, at the time, called Broken Wing Routine. It was there they first met Missouri native Riley Downing, trading tunes around a camp fire, though it would be a few years before all three would be in the same band together. Shortly after that first Woodyfest, Sam settled down in New Orleans, where he met fellow freight hopping, hitchhiking street musicians like Hurray for the Riff Raff’s Alynda Lee Segara and Yosi Perlstein, as well as New Orleans-based bassist Dan Cutler.

Doores and Cutler formed the original group under the name Sam Doores & the Tumbleweeds in February 2010, and began touring and playing honky tonks in New Orleans, and also served as the backing band for Hurray for the Riff Raff. That summer Sam spent another Woodyfest trading tunes with Riley and in September of 2010, Riley joined the Tumbleweeds in New Orleans, bringing with him a relaxed, downhome style, a powerful deep raspy voice, and a rich new bag of tunes.

While supporting Alabama Shakes and Michael Kiwanuka on a West Coast tour in early 2013, the band added John James and Cameron Snyder, completing the lineup, and has since toured together opening for The Lumineers and Oklahoma native John Fullbright.

In August 2013, the band discovered that it would have to change its name. The Tumbleweeds was taken and taken again, and that’s how The Deslondes were born—named after the street in the Holy Cross where the band first wrote, practiced, and recorded; and where Sam Doores currently lives.