Mr. Lewis and The Funeral 5 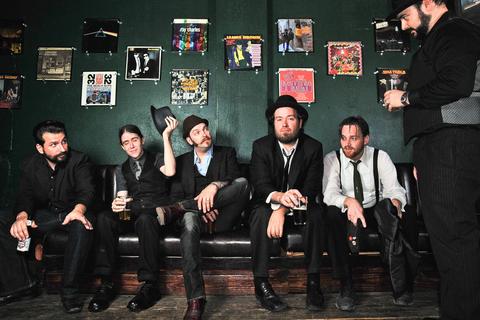 When fedora-wearing, experimentation-loving punk rockers get fed up with the status quo, anything can happen...” – Austin Chronicle

Macabre + Cabaret = Macabaret. It's a word that had to be coined, because how does one describe a group such as Mr. Lewis and The Funeral 5?

On its second album Delirium Tremendous (July 26th, Chicken Ranch Records) perhaps as Jim Morrison fronting a Rohypnol-addled Pogues? Or maybe as Tom Waits fronting The Doors. Obviously, this would be a good time for a shot of Jameson's.

Ah... So... The polite mister referenced here is Mr. Greg Lewis who, with childhood friend James Sheeran, combined a love of punk rock, Brit-pop, jazz and country in 2002 to form the band that bears his name and now counts a half dozen conspirators among its numbers.

Somewhere six feet under, Mr. Lewis and The Funeral 5 tends to a concoction consisting of the crushed soul of Alice Cooper, the wave-riding guitars of The Ventures, the literally animated metal of Dethklok and the dark burlesque of The Dresden Dolls.

Releasing the perfectly titled Murder and The Art of The Dance in 2007, Mr. Lewis and The Funeral 5 became a fixture on Austin's Red River music scene soon after. Inspired by New Orleans jazz funerals, Lewis arranges jubilant melodies with discordant no-wave dirges about love, sex, death, and whiskey.

The show at Valhalla on Tuesday, March 11