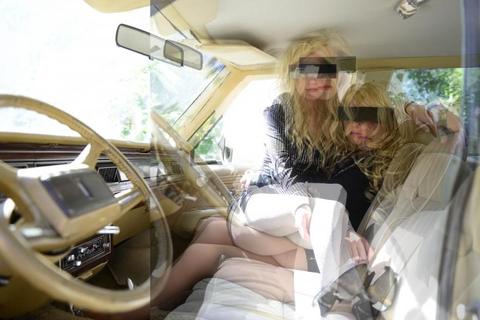 So many pieces of Savannah, GA three-piece The Casket Girls seemed to happen by accident. From their beginning — when electronic sound-shaper Ryan Graveface (Graveface Records, Dreamend, Black Moth Super Rainbow) found sisters Phaedra and Elsa Greene under a tree in one of Savannah’s many squares, playing Autoharp and singing bizarre songs — to the night they composed their sophomore album, True Love Kills the Fairy Tale, under circumstances that fall somewhere between séance and dream state, nearly everything about The Casket Girls seems to have been inspired by some kind of spooky happenstance. But then again, the Greene sisters don’t believe in accidents.
“I dropped off a shit ton of songs to the girls to work on one night,” Graveface says of the genesis of True Love, the follow up to Casket Girls’ critically acclaimed 2012 debut. “I went back to check on their progress, because they weren’t answering their phones. I don’t know if they dropped acid or what, but I walked in and Elsa was sobbing and reciting poetry while Phaedra was just staring straight ahead writing it all down, like catatonic. The next day they dropped off a CD and said, ‘We don’t even know what’s on this. You can throw it in the garbage if you want.’ I sat down and listened all the way through and cried. I was like, ‘Holy shit! They actually wrote a record like that!’ I booked studio time and had them re-record every note just as it was on the demo. They really didn’t remember any of it. Had to learn the songs as if someone else had written them entirely. Very bizarre.”
Phaedra and Elsa had filled the disc with lilting, almost whimsical melodies about chemical hazes and love gone sour like a couple of fucked up Shangri-las, to whichGraveface added a bevy of grinding, multi-dimensional psych-rock synths that will be familiar to anyone with a BMSR record in their collection. The title track speaks like an unknown voice in a lucid dream — perhaps the one that conveyed these songs through the veil in the first place —beckoning, ”True love kills the fairy tale… until heart and lungs fail.” It’s this twisted and comforting charm, which set in motion the Graveface-Greene love affair in the first place, that relieves us from fear.
The Casket Girls have gained momentum and a substantial cult following due to the unflagging catchiness of theirsongwriting and the compelling development of their live stage show. They spent the last year and a half touring insupport of BMSR and the Faint before growing into headliners in their own right. Last year, they released a self-titled EP on Record Store Day, and a ”cassingle” cassette store day.
True Love Kills the Fairy Tale is slated for a February 2014 release, after which the trio will hit the road for a slew of US dates, followed by a sojourn through Europe. Visit casketgirls.org to for tour date developments, new-music nuggets and more.