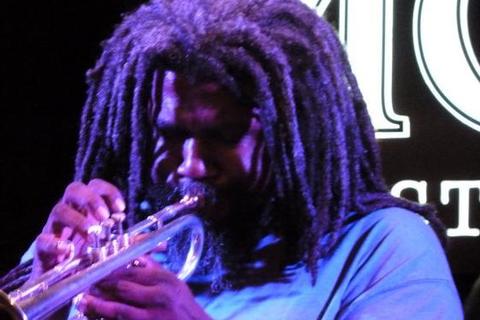 "Austin-based trumpeter, composer and band leader Jeff Lofton is a veritable jazz virtuoso,” writes NPR affiliate KUT 90.5 FM in Austin. “Comparisons are frequently made to Miles Davis - and rightfully so. Lofton's take on standards frequently astounds, and his originals are equally delicious."
Lofton studied composition at the University of South Carolina and moved to Austin in 2007 at the age of 40. Since then he’s been voted Best Jazz Band at the ‘10-’11 Austin Music Awards during SXSW; January 15, 2009 was named "Jeff Lofton Day" by the City of Austin; and he was inducted into the Texas Music Museum.
The Austin American-Statesman’s 2010 Out and About 500: Music list noted his "ubiquitous presence and articulate advocacy." His album, "Jazz to the People," made the 2009 top albums lists for the Austin Chronicle and KUT. In 2011 his side project, The Jeff Lofton Electric Thang, recorded a live album at the Cactus Cafe and performed at San Antonio’s JazzSAlive festival.

"Listen up Miles Davis fans…" from the Austin American-Statesman and "… channels Miles Davis…" from the Daily Texan were some of the early reviews when Lofton arrived in Austin. Mostly unknown to the local jazz scene, word-of-mouth drew people to hear his unique sound at small bars in East Austin. Soon his shows were being described as "...crazy good and crazy crowded." (Joe Gross, Austin American-Statesman).

In March of 2010 "Jeff Lofton's 1950s Miles Davis Tribute" drew a large crowd at One World Theatre with the help of media sponsor KUT 90.5 FM, though competing with opening night of SXSW in nearby downtown Austin. The show was soon booked at the Iridium Jazz Club in New York. Previously the show launched a jazz series in collaboration with the University of Texas’ Blanton Museum's hosting of the "Birth of the Cool" exhibit in 2008, and was booked at Scat Jazz Lounge for it’s Fort Worth debut. In 2012 the tribute debuted in San Antonio for KRTU's Year of Jazz series, drawing a crowd of 550.This is Lofton's 4th year performing at the SXSW music festival.

The show at Elephant Room on Thursday, March 13