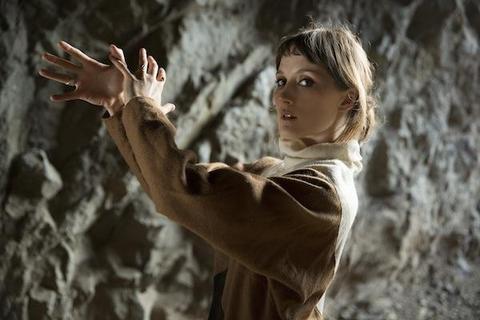 Cate Le Bon is an artist hailing from Carmarthenshire, rural West Wales and is currently a resident of Highland Park, Los Angeles, having relocated across the pacific to record her latest album 'Mug Museum'.

Her first album 'Me Oh My' was released on Gruff Rhys's Irony Bored label in 2009 and was followed by 'CYRK' (OVNI/Turnstile) which was released to widespread acclaim in 2012 and saw her play live across the world. A frequent collaborator, Cate sang the duet 'I Lust You' with Gruff Rhys on Neon Neon's Mercury nominated debut album 'Stainless Style' and also features on '4 Lonely Roads', from the forthcoming Manic Street Preachers album 'Rewind The Film'. Perfume Genius features on the Mug Museum song 'I Think I Knew'.

Presented by: Turnstile Presents "We Throw Parties, You Throw Knives"

The show at St David's Historic Sanctuary on Thursday, March 13