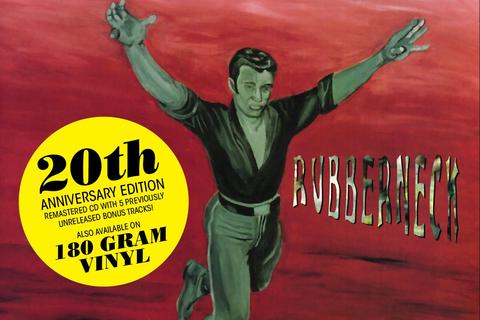 Toadies
Vaden Todd Lewis – vocals, guitar Clark Vogeler –guitar
Mark Reznicek – drums Doni Blair – bass
Looking over his shoulder at Rubberneck, the Toadies’ platinum-selling 1994 debut, drummer Mark Reznicek is reflective. “Hard to believe it’s been 20 years,” he says. “It seems like yesterday. But, at the same time, it was a lifetime ago.”
The songs on Rubberneck are fearless, literate and visceral. Their protagonists are perceived as anti-heroes: stalkers, serial killers and religious zealots (some are all three). Certainly, they’re not your average, accessible radio fodder. Well, the Toadies weren’t concerned about that. “We didn’t even have singles in mind,” Reznicek says. “Or the idea of even possibly getting on the radio. We didn’t think that would ever happen.” But “Possum Kingdom” remains a radio staple even today – and “Backslider” and “Tyler” still pop up. It’s because raw expression makes for the most powerful art.
The Toadies remain raw. Vaden Todd Lewis still sings as though he’s on the precipice of insanity, clinging tenaciously but perhaps already plummeting. Lewis’s and Clark Vogeler’s guitars rip and tear like thick fingernails at supple flesh. Reznicek and bass player Doni Blair (who joined the band in 2008) fuel the fury with relentless, seething rhythm.
When these sounds and those images and themes mix, the effect is pure adrenaline. The manic, chugging-choogling strains of Rubberneck’s opening instrumental salvo “Mexican Hairless” run pell-mell into the equally breakneck “Mister Love,” a backhanded plea for salvation. The pace slows, a little, for “Backslider,” where a father drowns his nine-year-old son in deliverance. And then “Possum Kingdom,” the Toadies’ notoriously creepy megahit, slows things down again with a dangerous antihero’s offer of a different salvation.
In just these four songs, Rubberneck leaves the listener feeling fed. The songs are meaty, with much to chew on: images to parse, significances to consider, guitar riffs and drum parts to mime. It continues for seven more tracks – including fan favorites like “Tyler” and “I Come From The Water” – and leaves you satisfied and a little uncomfortable.
It’s the same with every spin of Rubberneck. That’s why it endures. And it’s why the Toadies, with their current label Kirtland Records, and the blessing of original label Interscope Records, are reissuing Rubberneck – remastered and beefed up with five unreleased tracks from the same era – for a new generation.
Rubberneck’s staying power breeds new fans to go along with the Toadies’ early-adopters, whose faith never flagged even as the band struggled to release new music. When their would-be second album languished on the label shelf, they circulated demos and bought tickets. Even when a different second album, 2001’s Hell Below/Stars Above, fared poorly and the Toadies broke up, the fans’ steadfast evangelism continued. “These are fans from when Rubberneck first
came out,” Reznicek says. “They’ve turned their younger siblings, and their kids, on to us. We see them all the time – whole families wearing Toadies shirts. It’s pretty cool.”
A one-off show in Dallas in 2006 became a full-fledged reunion. The Toadies have since steadily built momentum. A third album, No Deliverance, came in 2008 and saw the band playing Lollapalooza. The heretofore-lost album, Feeler, finally materialized in 2010. A new album, Play.Rock.Music came out in 2012. Tours followed each release. The band’s annual Dia de Los Toadies festival – at which the likes of Gary Clark Jr., Ben Kweller, Centro-matic, Sarah Jaffe, The Sword and Black Joe Lewis have appeared, grows each year.
Today the Toadies – and their magnum opus – are stronger than ever. Rubberneck’s new master makes it an even more striking listen. “Three of the five songs were actually recorded during same sessions,” Reznicek says. In their customary position at the end of the original sequence, these tunes actually sound as though they’re not bonuses. The loping “Run In With Dad,” where titular fanatic catches his son fornicating, could fit right in between “Backslider” and “Possum Kingdom.” Likewise “Stop It,” which is actually a Pylon cover – it wouldn’t be so out of place between “Tyler” and “Happyface.” The instrumental unfinished demo “Rockfish,” (part of which was used to create “Waterfall” from Feeler) could make a nice bookend with “Mexican Hairless.” The other rarities, Rubberneck-era live takes of “Possum Kingdom” and “Tyler” are snapshots of a band in original form.
Of course, with 20 years and thousands of shows behind them, the Toadies sound even better. On the road in 2014, supported by the Supersuckers and Battleme, the Toadies will pay tribute to their fans’ support by playing Rubberneck start-to-finish. “I honestly cannot wait to get onstage in front of these fans and play the album front to back,” says Vogeler. “I've been looking forward to it for years and, after this anniversary tour, I can’t imagine that we’ll ever do it again.” Lewis is likewise stoked. “Performing these songs will never get old for me so long as I'm able to look out and see smiling, sweaty faces looking back,” says Lewis.
The Toadies will also have vinyl copies of Rubberneck at the merch table. It’s a fitting celebration that the band can now toast with their new signature beer (brewed by fellow Texans as Martin House Brewing), aptly dubbed Rubberneck Red. And there’s loads more to look forward to in 2014 – including a new album due this Fall. “It’s gonna be our ‘chill set’ that we play on the first night of Dia de Los Toadies,” says Reznicek. “Acoustic, stripped-down versions of our songs. Probably some new songs, some previously unreleased songs and some new covers.” Recording is currently underway with Rob Schnapf, one of Rubberneck’s original producers.
And there’ll be more where that came from.
“[The Toadies] has been a hell of a lot of hard work,” says Lewis, “but also a hell of a lot of fun. And it continues to be every time we take the stage.”