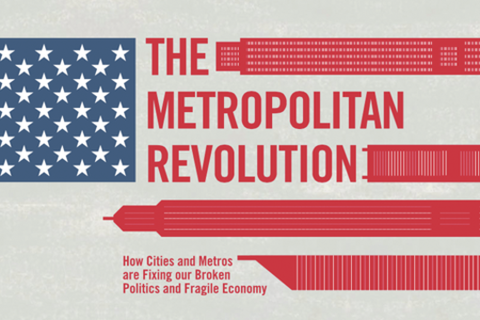 A revolution is stirring in America. In the face of federal gridlock, economic stagnation and fiscal turmoil, power in the United States is shifting away from Washington to cities and metropolitan areas. With uncertainty and lack of national leadership on issues from R&D funding and commercialization of innovation to skilled immigration, smart cities and metros are fostering innovation ecosystems tailored to their distinct assets and attributes for sustainable and inclusive growth.
Jennifer Bradley will present specific examples with replicable lessons for any city, including: a network of civic organizations connecting entrepreneurs, investors, inventors to create a new era of manufacturing in Northeast Ohio; a regional community center in Houston that is upgrading the skills of immigrants in one of the nation's most diverse metropolises; and applied science campuses in NYC that foster entrepreneurship and link tech talent to the city's media, fashion and medical industries.

Jennifer Bradley is a fellow at the Brookings Metropolitan Policy Program and the co-author of The Metropolitan Revolution (Brookings Press, 2013). The book, and her work in general, explain the critical role of metropolitan areas in the country’s economy, society, and politics.
At Brookings, Bradley has worked extensively on the challenges and opportunities of older industrial cities and has co-authored major economic turnaround strategies for Ohio and Michigan. She has also written popular articles that bring program research to life for a broad audience, including the readers of Newsweek, The New Republic, The Atlantic Monthly, and Next American City.
A former attorney, Bradley co-authored Supreme Court amicus briefs in cases that affirmed the constitutional powers of local governments and secured greater environmental protections, including the landmark case, Massachusetts v. EPA.
Bradley has a J.D., magna cum laude, from Georgetown University Law Center, an MPhil from Oxford University, which she attended on a Rhodes Scholarship, and a B.A. from the University of Texas.