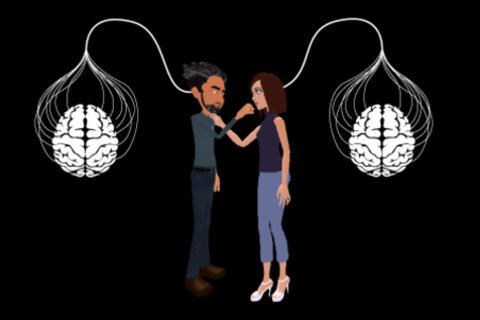 Recent advances in technology that support the creation of interactive virtual reality, and breakthroughs in the tools of non-invasive human neuroscience have now resulted in a collision of these two exciting worlds. Phillip Rosedale, founder of Second Life and High Fidelity, and Adam Gazzaley, UCSF neuroscientist and neurologist, will present a provocative vision and discussion of how these worlds have reached the level that allow them to interact, inform and influence one another.

Dr. Adam Gazzaley obtained an M.D. and a Ph.D. in Neuroscience at the Mount Sinai School of Medicine in New York, completed clinical residency in Neurology at the University of Pennsylvania, and postdoctoral training in cognitive neuroscience at UC Berkeley. He is the founding director of the Neuroscience Imaging Center at the UC San Francisco, an Associate Professor in Neurology, Physiology and Psychiatry, and Principal Investigator of a cognitive neuroscience laboratory. His laboratory studies neural mechanisms of perception, attention and memory, with an emphasis on the impact of distraction and multitasking on these abilities. His unique research approach utilizes a powerful combination of human neurophysiological tools, including functional magnetic resonance imaging (fMRI), electroencephalography (EEG) and transcranial stimulation (TES). A major accomplishment of his research has been to expand our understanding of alterations in the aging brain that lead to cognitive decline. His most recent studies explore how we may enhance our cognitive abilities via engagement with custom designed video games, neurofeedback and TES. Dr. Gazzaley has authored over 80 scientific articles, delivered over 300 invited presentations around the world, and his research and perspectives have been consistently profiled in high-impact media, such as The New York Times, New Yorker, Wall Street Journal, TIME, Discover, Wired, PBS, NPR, CNN and NBC Nightly News. Recently, he wrote and hosted the nationally televised, PBS-sponsored special “The Distracted Mind with Dr. Adam Gazzaley”. Awards and honors for his research include the Pfizer/AFAR Innovations in Aging Award, the Ellison Foundation New Scholar Award in Aging, and the Harold Brenner Pepinsky Early Career Award in Neurobehavioral Science.

In 1995, Philip Rosedale created an innovative Internet video conferencing product (called "FreeVue"), which was later acquired by RealNetworks where (in 1996) he went on to become Vice President and CTO. In 1999, Rosedale left RealNetworks, founded Linden Lab and built a virtual civilization called Second Life, fulfilling his lifelong dream of creating an open-ended, Internet-connected virtual world. Since leaving Second Life in 2010, Rosedale has worked on several experiments in distributed work and computing, including Coffee & Power and Worklist.net. In 2013, he co-founded High Fidelity Inc. to explore the future of a next-generation virtual reality system.