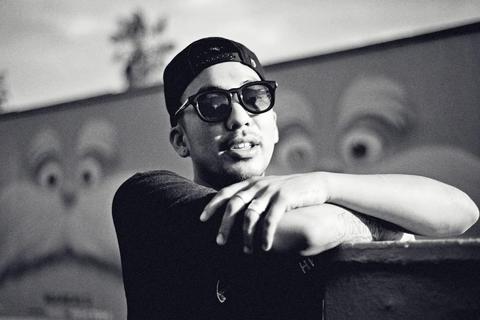 Where the Pacific collides with California and breaks at the foot of Americas smog capital/culture factory, Alexander Spit (government name Alexander Manzano) thrives in a creative haze, currently perfecting the hyper-blunted blend of trap-psychedelia and heavy lidded musings on women, weed, and whips, and the lengths Californians go to have the finest of all three.

Born in Los Angeles during the tail end of Reaganomics, Raymond Manzano sought the promise of blue-collar work in the percolating melting pot of the Bay Area and uprooted the Manzano clan. Old enough to remember the move and young enough to fully absorb his new surroundings, Spit settled among the skateboarders, hippies, and Nortenos of the North Bay and incorporated their slang and appreciation for high grade inebriates into his developing art during he early 2000s. Another Bay Area resident had achieve local ubiquity during his period, and only when Mac Dre passed did his influence fully saturate rap music at large. Alexander’s music has always paid homage to that unique aesthetic though the national hype machine bore another trend, hyphy, that almost instantly imploded.

His hands clean of that stigma, Alexander moved to San Francisco and partnered with locals to form Instant Messengers before going solo and releasing Open 24 Hours, his debut full length, for free on the internet via streetwear design boutique The Hundreds (whom he had recently begun working for) in 2009 and the follow up, Until Next Summer shortly after. With the momentum he generated from those releases and a job opening at the flagship store of his employer at the center of the bubbling Fairfax neighborhood of Los Angeles, Alexander seized the opportunity to bury himself in production software in East Hollywood while commuting to the store on the bus, penning lyrics during the ride. The result was September’s These Long Strange Nights, an overwhelming growth from his prior work, a reverb-drenched assertion if his vision, blurred yet fixated on the vices that typify life in Tinsel Town. Mansions, his most recent effort, was an instrumental exercise, Spit flexing his production chops to create a hallucinatory soundtrack comprised of samples and deafening drums.

Alexander Spit’s music has never been easily relegated to any particular movement, rather hovering above signposted archetypes and cherry-picking influences from everything uniquely West Coast – a South Central Los Angles aesthetic juxtaposed against an appreciation for the psychedelic liberation of Humboldt County. Shag carpet on the floor of a slammed El Camino. A hit of Bart Simpson blotter on the tip of a poison tongue.

The show at Austin Music Hall on Friday, March 15