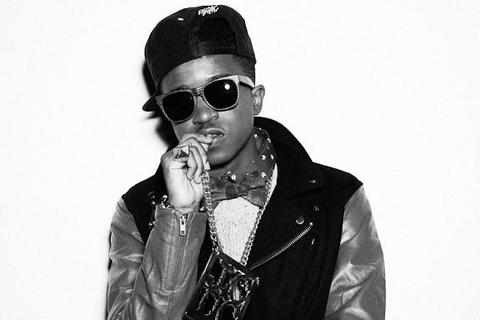 DyMe-A-DuZin is the epitome of a rising star. Since emerging onto the music scene, the 20-year-old rap phenom has garnered the attention of hip-hop aficionados and music execs alike. The Brooklyn emcee wrote his first song at the age of 11, produced his first music video at the age of 14 and landed a major recording contract with Warner Bros Records at the age of 19.

DyMez captures the unique essence of a dynamic generation through his music, persona, and style. His vibrant and deft lyricism coupled with an ear for melody and strong hooks are a breath of fresh air amongst the realms of mainstream hip-hop. Though inspired by pioneers and influencers of rap, DyMez has succeeded in constructing a delivery that is distinctive to him alone – clever, clear, fresh, introspective, and cool.

This distinction has paved the way for this budding artist to work with hip-hop heavyweights, most notably producers Plain Pat and Emile who were featured on DyMez’ “20=X ” mixtape. As one of the front-men of Brooklyn’s own Phony Ppl (a visionary young band of rapper/singers, producers and musicians that are on the cutting edge of New York hip-hop's current renaissance), DyMez has had the opportunity to open for the likes of Theophilus London, Erykah Badu, and The Roots. As a solo artist, DyMez has prepared stages for hip hop’s elite; performing with Buckshot, and opening for Talib Kweli.

Whether through his music or performances, DyMez continues to build a huge following. He has gained steady traction on Twitter, Facebook and YouTube, and is a mainstay on the music and lifestyle blog circuits.
With a solid start, DyMe-A-DuZin is ready to propel his career to the next level. The highly anticipated “A Portrait Of Donnovan” mixtape, DyMez first project with Warner Bros, boasts A&R by Dante Ross, features production by Plain Pat, Kaslow, Emile, Harry Fraud and Omen, and is a masterpiece to be uncovered. As the title presumes, the mixtape will draw listeners closer to the emcee - painting a clear picture of the skills, artistry, and unique perspective that DyMez has to offer to hip-hop’s world stage.

In preparation for the release, DyMez released videos for “Swank Sinatra” featuring Joey Bada$$, CJ Fly, and the late Capital Steez, as well as “New Brooklyn”, which premiered on Jay-Z’s Life+ Times site, and instantly hit the airwaves of New York’s Hot 97 Peter Rosenberg’s show, major blogs, and media outlets. DyMez rounded off the pre-release offerings with the introspective “Memories,” which features production by Harry Fraud.

The show at Lucille on Friday, March 15